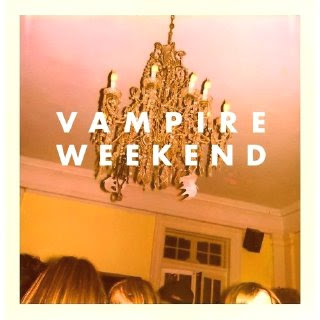 In the year when the British skinny jeans indie rock boys finally ran out of steam with their one idea, it was left to cardigan wearing Ivy League graduates Vampire Weekend from the USA to show that boys with guitars could still do something inventive.

Vampire Weekend’s self titled debut album is a smart, fun, infectious and ever so slightly ridiculous kaleidoscopic mix of Afrobeat, indie-funk and post-punk that triumphs with its cocktail of forms. Of course this is not the first time that African influences have been taken so far into the mainstream, Paul Simon got there years ago with Graceland, but this album still feels highly refreshing. Vampire Weekend has energy written through its core and it is praise indeed when one can say that this album sounds unlike anything else released this year.

God knows how they will follow this one up, Breaking More Waves suspects that it is going to be difficult as their chirpy clever rhythmic pop may wear thin after a short burst, but for now in 2008 Vampire Weekend is our fifth favourite album. Here's A Punk from the record.