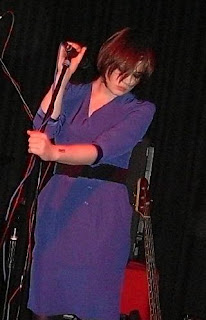 Following the split of the original Pipettes to pursue other musical projects, previous member Rose Elinor Dougall has been first to throw off her musical shackles and venture out into new areas, playing a handful of solo gigs. This hometown show is the launch party for her limited edition debut single Another Version of Pop Song. The small venue with a crackling fire plus Christmas cheer downstairs with red drapes and a rotating glitter ball upstairs is ready to welcome an audience that includes Gwenno from The Pipettes, as well as giving Rose the opportunity to showcase the new material and find her feet on stage again.

Finding her feet at first seems a little complex; “I think my arse is going to fall onto the cymbal,” she giggles after her first song, but composure regained she coasts her way through a set of pleasant if not entirely groundbreaking Casio lead summery sounding indie pop songs that hark back to the days of late 80's / early 90's indie bands such as The Darling Buds and The Sundays. This material is far removed from The Pipettes, sounding more dreamy, mature and credible. There is the carousel quietness of May Holiday and the chiming indie guitars and handclap frenzy of To The Sea, which shows a boldness that asserts itself on first listen.

Physically not every aspect of The Pipettes has been removed. The polka dot dresses and schoolgirl dance routines may have disappeared, but Rose still comes across like a stern teacher when she places both her hands on her hips and raises her eyes skyward as she sings. Backed by a four piece band called The Distractions there are effects laden mandolins and almost Cure like guitars in places which give the music a slightly edgier tone, with Roses vocal having enough strength and depth to hold one’s attention without ever astounding.

These are early days for the ex Pipette, and whilst this performance suggests that she does not intend to gatecrash the charts, her new music may ultimately have more long term appeal than the retro pop thrills of her previous band.
Posted by Breaking More Waves Blog at 00:01