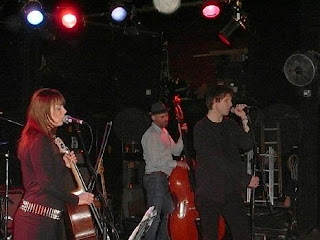 As Isobel Campbell and Mark Lanegan take to the stage of Portsmouth Wedgewood Rooms they barely acknowledge the audience, making it quickly apparent that tonight is all about the music. Lanegan’s tall brooding persona, with his eyes either shut or focussed on the floor and Campbell’s innocent girlishness create contrasting styles, yet both seem harmonious, almost like a long married couple. They interlock musically so well that they do not have to talk on stage to understand each other.

Dimly lit below a still hue of pink and blues both artists take on similar poses at their microphones, their hands clutching the stand for safety. The ambience tonight is almost one of invading a private rehearsal space. Campbell and Lanegan remain virtually silent between songs with only two small utterances of thank you and a brief name check of the band members. The only engagement is through the music.

So did the music work ? Well for the most part yes. Much has been made of the pairs contrasting voices. Campbell’s is reminiscent of innocent sounding 60’s French pop, layered with echo, whilst Lanegan’s is the deep gravely voice of midnight. Backed by a soundtrack of mid western dark folkish county blues the songs are atmospheric, sometimes black, and performed competently. However there was no sense of the live experience taking you on a journey any further than what had already been revealed on their two albums. Certainly the sophisticated sultry Come On Over (Turn Me On) was dangerously flirty and turned up a notch or two in the power stakes, Back Burner was hypnotically moody, and Keep Me In Mind, Sweetheart featured some fine whistling from Campbell and Johnny Cash style vocals from Lanegan, but there was no further emotional connection with the audience from either of the artists, apart from an appreciation of some well performed songs.
Posted by Breaking More Waves Blog at 01:30