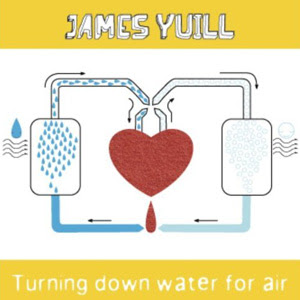 Turning Down Water For Air by James Yuill combines maverick electronic beats, gentle acoustic guitars and Yuill’s massage soothing vocals to produce Breaking More Waves eighth favourite album of the year. Like a one man Radiohead who strapped his acoustic guitar on his back but left the electronic ones at home, Yuill’s album will appeal to those who enjoy a groove to Aphex Twin or New Order, but also find songwriters such as Nick Drake in their album collection. It’s an inventive and clever album that manages to capture moments of restraint and an off your face dance floor madness.
With this winning formula Yuill manages to conjure surprises throughout, such as on the single No Pins Allowed, where dirty shuffling beats gradually build and a repeated guitar loop seems to set the pattern. Then the whole thing breaks down into a segue of mammoth robotic euphoric synth sounds; Aphex Twin himself would be proud of such moments like this. One can almost imagine Yuill as a mad scientist who has taken too many drugs at the disco.
Despite these manic moments, what makes this album work so well is that despite the computerised beats, the album feels warm and very human. The fragility of songs such as the xylophone lead Head Over Heels dispense with the electronica completely and even the pulsing No Surprise leaves a lasting impression of comfort.
Turning Down Water For Air is an album of contrasts that demonstrates perfectly that opposite sounds attract. If you haven’t heard of Yuill yet, this video to No Pins Allowed shows perfectly what he is about.
Posted by Breaking More Waves Blog at 00:44

Damn you! Now I have another record to put on my wish list...