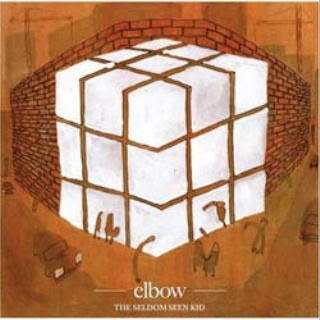 The Seldom Seen Kid by Elbow is one of the most elegant and masterful albums produced this year. If ever record companies want proof of the value of sticking with a band and not dropping them after one album fails to make the grade commercially, Elbow are that proof. Whilst every album they have created has had its moments, this, their fourth represents a band at its peak.

Guy Garvey and his cohorts have created a rich tapestry of often sombre sounding but beautiful songs which bubble with emotion. “The violets explode inside me when I meet your eyes. Then I’m spinning and I’m diving like a cloud of starlings. Darling is this love?” he sings on opening track Starlings. These lyrics are thoughtful, expressive and read as well as they are sung. Garvey’s often wry and poetic take on the world and his ability to make the personal seem so wondrous is the skill that makes him one of the country’s best contemporary songwriters.

The Seldom Seen Kid simply oozes quality. From the bluesy crunching Grounds For Divorce, to the incredibly gentle and delicate Weather To Fly, a song so criminally good it needs arresting. Then of course there is One Day Like This, which demonstrates that Elbow also know how to produce an anthem that will appeal to the masses. A string laden song which united a cast of thousands at festivals across the UK this summer with its repeated mantra of “So throw those curtains wide. One day like this a year would see me right.” It will make you well up inside, grab hold of whoever is next to you and tell them that you love them. You might even make babies to it.

The Seldom Seen Kid is one of the most life affirming and important albums released this year, that continues to improve with every listen as we march into 2009. It was almost Breaking More Waves number 1, but that is left to the ultimate ‘grower’ of the year.....

Here’s One Day Like This at Glastonbury. Watch this right to the end and be moved. If you are not, check your pulse. You must be dead.

Email ThisBlogThis!Share to TwitterShare to FacebookShare to Pinterest
Labels: Best Albums Of 2008, Elbow