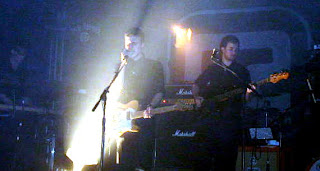 White Lies produce white boy gloomy indie rock with obvious reference points of Editors, Joy Division, Interpol, Simple Minds, Psychedelic Furs and Echo And The Bunnymen. They’ve been around for almost a year now, having played their first gig in London last February and signing a record deal just a month later. Formed from the remnants of the not particularly good Fear Of Flying, White Lies are a more attractive proposition than their previous form. This is a band who music marketing men can salivate over, such is the ease of knowing their position in the market. It’s very much a defined genre. However those marketing men must also be a little nervous. For in marketing terms what is White Lies unique selling point ?
However, maybe White Lies can destroy marketing theory and show that a unique selling point is irrelevant. As we approach the end of the noughties there is no truly original music anymore. Every note, every sound has been done before, with every artist referencing something from the past. As we look back over this decade, it’s musical identity will not be defined by particular movements such as acid house, psychedelic or punk, but by the way music is made, distributed and consumed. This was the decade where the internet revolutionised music, rather than music revolutionising on its own merits.
So if this sounds harshly critical of White Lies for not producing something incredibly inventive or original, it is not criticism of just White Lies, but virtually every other new band out there as well.
White Lies are included in this One’s To Watch list for a number of reasons. First, what they do, they do very well. Gloomy, cinematic music, neatly polished with a stadium sheen. Second, at this moment in time they are one of very few bands of their genre out there that are floating Breaking More Waves boat. Previous singles Death and Unfinished Business are both dramatic pieces of intensity with melodic hooks that engage. Finally, despite their darker sound, White Lies certainly have potential to be a commercial success both in the UK and worldwide. With backing from Fiction records, currently home to the likes of Snow Patrol, Elbow and Kate Nash they may achieve it. As the band say themselves, the reason for their name is because “White lies are common but quite dark, and that's how we see ourselves. We want to make our way into people's lives, but there's a dark undertone to what we do.”
Posted by Breaking More Waves Blog at 00:01

Email ThisBlogThis!Share to TwitterShare to FacebookShare to Pinterest
Labels: Ones To Watch 2009, White Lies