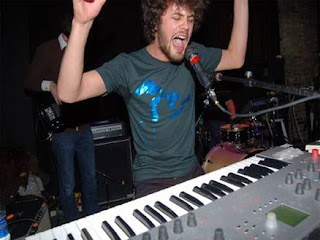 The off kilter swirling pop of Passion Pit has been the talk of the blogosphere for some months now. Breaking More Waves has been at it, raving about them at the start of November, and elsewhere somewhat exaggerated claims of them being the future of music have been heard. All this before they have released anything in the UK.

But times are about to change and now that the band have signed to Columbia it looks like the Chunk of Change EP is finally going to get an official release on these shores in February. Of course the EP has been on I Tunes for some time and has been blasting from the Breaking More Waves stereo, but the physical release will get their tunes out to UK radio and a wider audience.

The band also have a UK support slot with Black Kids on their NME Show at Koko, London in February and will be playing at the South By South West Festival in Austin Texas in March.

To follow up the EP, the band have been spending time in the studio recording their debut album which they are writing a blog about . If the results of these recordings are anything as good as the distorted falsetto vocals, delirious devilish samples and deranged tunes such as Sleepyhead, I’ve Got Your Number and Cuddle Fuddle from the EP, the album should be a trippy electronic extravaganza for those who enjoy the mixed up dance floor fun of The Avalanches and The Go Team as well as the vocal stylings of bands such as Flaming Lips, Mercury Rev and MGMT.

Expect high larynx histrionics from Passion Pit in 2009. They will bring a lot of smiles, and if there is any justice Sleepyhead will be one of the songs of next year in the UK. We posted the video on our last blog about the band, but the video is so good we are posting it again here.

Email ThisBlogThis!Share to TwitterShare to FacebookShare to Pinterest
Labels: Ones To Watch 2009, Passion Pit