Too Many T's - New Waves 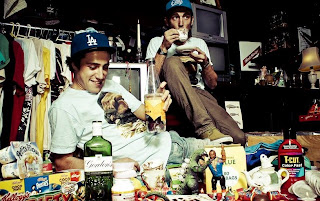 Too Many T’s hark back to the days when it wasn’t all about rappers having a huge sense of self importance and heavy world domination but instead a characteristic that seems to have become a dirty word in certain highbrow elitist sections of the so called music loving world; and that word is fun.

With their debut EP (titled T.P – see what they did there?) released in May, Leon Rhymes (real surname Smith) and Standaloft (who is actually called Ross) from south London promise ‘premium rap skills, good vibes, side serving of jokes,’ and that’s exactly what you get. Although there may be some humour in what Too Many T’s do, it’s not so ridiculous to become novelty such as an act like Goldie Lookin’ Chain. Instead over the course of the four tracks we’re reminded of The Beastie Boys, De La Soul, Grandmaster Flash and Jurassic 5 as well as the more modern day rap pop purveyors Rizzle Kicks. On the EP you’ll find fast and furious flows, 1920’s styled swing, old school beats, funky guitar licks and brassy punches that if you’re anything like us you’ll find much more pleasure in than the intense and rather nasty sounding Yeezus.


This summer you’ll find Too Many T’s at a whole host of festivals including Secret Garden Party, Fieldview, Boomtown Fair, Shambala and Bestival. If you want hip hop to make you feel good, feel positive and make you want to dance your sorrows away rather than wallow in them, then we recommend you download the EP (you name your price) by clicking here and if you’re going, catch them at one of those events.

Email ThisBlogThis!Share to TwitterShare to FacebookShare to Pinterest
Labels: Too Many T's