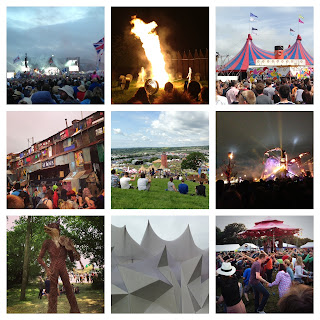 If you have any passing interest in music and particularly if you live in the UK, it’s almost guaranteed that you couldn’t have failed to notice that last weekend was the Glastonbury Festival.

The event really needs no introduction. With nearly 180,000 people on site including performers, crew and audience, it’s a colossal 5 day beast, with gates opening on the Wednesday, but the main stages only kicking into gear on the Friday.

Irrespective of if you were there or not, you’ve probably already formed your own opinion of the event. Let’s roll out the ‘not as good as the old days’ clichés from those who forget the shootings, the really high levels of theft and incredibly low levels of hygiene that existed then. Or maybe ‘the line-up is crap’ arguments that are usually based on an overview of just the main stages and not the 50+ stages that encompass the full site that includes theatre, art, spoken word and cinema besides music of many different genres, both popular and underground. Or the ‘too commercial’ arguments from those who think a festival can sustain itself for decades on enthusiasm alone and not money. Or the ‘it’s full of hipsters’ / ‘it’s full of smelly druids’ arguments from those who have either never been to Glastonbury and therefore don’t actually know what it’s demographic is or find diversity a difficult thing to deal with.

And if you don’t have an opinion you may have already reached Glasto-music-overload with both the extensive media and online coverage or just physically being there in amongst it all, so here instead of a standard write up of the performances, here are....

Britain may be a nation of alcoholics but at least at Glastonbury the vast amount of alcohol consumption is compensated for a little by everyone doing some exercise. With some punters having to trudge not inconsiderable distances of up to 40 minutes from the car parks to their chosen camping spot on site , carrying multiple cases of lager / cider / wine it certainly gets a sweat on and is possibly the equivalent of a good work out in a gym. The more wasted you intend getting at Glastonbury the more improved your fitness will be before you start doing so.

2. Unless you’re very close to the front, the Pyramid Stage doesn’t provide an immersive whites of the eyes gig experience in any way. (These comments also apply to a certain extent to The Other Stage).

The Pyramid stage is huge, really huge. Even the pit at the front is larger than most gig venues. If your idea of a great gig is to stand and watch some small dots on a stage that may be people, your view partly obscured by waving flags, whilst watching the whole thing on a large screen to the side then the Pyramid is for you. Otherwise, unless you’re right down the front there are much more involving stages (over 50 of them). Besides cinema, circus and literature we managed to see over 30 bands during the 5 days and by only seeing 2 bands on the Pyramid stage we easily managed to be in the front few rows for every show we saw.

3. Re: The Glastonbury 'spirit'. Glastonbury isn’t all about community and love. It’s just as much about the every man for himself early morning towel on the sunbed mentality.

Here’s our tip in this respect. Quite simply get there early (we recommend Wednesday morning) and bag yourself your preferred camping spot. Otherwise there’s a risk of being shoved up near the stinking toilets, next to a pathway with everyone trampling over your tent. Thankfully as this the seventh time Breaking More Waves had attended Glastonbury we didn’t have to learn this the hard way.

4. Daft Punk doesn’t even have to be at a festival to be one of the most talked about bands of the weekend.

“Daft Punk is doing a secret DJ set.” These words spread like a viral rash over the site during the weekend. Specific bars, stages and times were named as if absolute fact. Even though the organisers had gone on record saying they weren’t appearing and confirmed this on social media during the course of the weekend. If you really want to see Daft Punk at a UK festival in 2013 we suggest you try this daft undertaking; Introducing – a Daft Punk project band that will be playing Camp Bestival and Bestival this summer.

5. Glastonbury really does have its own micro climate.

First there was cloud, then sun, then rain (with accompanying mud and wellies) then sun (with the mud drying out very quickly) and even snow, albeit the snow was only in the Greenpeace Arctic Experience area.

6.Irrespective of the Daft Punk secret show that was never going to happen there were a lot of surprise performances in 2013.

Unexpected faces in unexpected places included Michael Eavis cropping up in the Rabbit Hole to sing a song, Beady Eye opening the Other Stage on Friday morning with Liam Gallagher setting out to demonstrate that it’s never too early for rock ‘n’ roll. (Our favourite Gallagher quote of the day was at the end of their set: “You’ve been amazing, but not as good as us.”). There was also Alt-J at Williams Green, a raft of short (2-4 song sets) from the likes of Gabrielle Aplin, The XX, Haim and Tom Odell at the BBC Introducing Stage (plus a longer high energy one from Rizzle Kicks) and plenty of stripped down sets in the tipi/shack that is the Crow’s Nest high on the hill above The Park Stage where we caught the likes of Stornoway and KT Tunstall playing to a handful of people rather than their bigger main stage slots.

7. “What was your highlight?” is after a festival (particularly Glastonbury) the most commonly asked question by someone who didn’t go.

Most people expect the answer to involve Mick Jagger and his swagger. We saw The Rolling Stones; it was almost as if when we received our entry wristband some strange chemical seeped from it into our bloodstream making it an obligatory thing to do. “It’s a moment of history,” one bearded crusty psychedelic looking fellow shouted as the band came on stage. But it wasn’t our highlight, quite possibly for learning point 2 above, whatever the historical context.

We didn’t have one singular ‘Glastonbury moment’, however Little Boots mouthing “I love you,” directly at us during her A.M.A.Z.I.N.G DJ/remix/live performance set, London Grammar and Sam Smith’s voices giving us goosebumps in the slow roast temperatures of the Pussy Parlure Nouveau, Kate Nash’s adrenalin fuelled punk pop and dancing on the Leftfield stage, crazy hoe downs and barn dancing with strangers at the Bandstand with Cut A Shine plus Emerging Talent Competition winners Bridie Jackson and the Arbour’s subtle, graceful and calming bell plates, cello, fiddle, piano and gorgeous vocals caressing their way across a sun kissed site from the Acoustic tent on Saturday morning were all damn near perfection. We’re streaming Bridie Jackson’s new single below.

8. It’s possible to remain clean, fresh, fragrant and looking good at any festival (but as Glastonbury is 5 days long this is even more important) without queuing for hours for a shower.

Simply take with you 1 plastic bowl, 1 water carrier, a single ring gas burner, some soap and a flannel. Hot washes a plenty! Some people will be amazed at the ‘extraordinary lengths’ you have gone to in carrying this equipment some distance to site. They are usually the same sweating stinking people struggling with multiple cases of cider and lager.

9. Talking at the top of your voice about how many illegal (or legal) drugs you’ve taken during your weekend is boring.

It really is. Yawn. People who want to do this should have their own special area of the site where they can all boast boringly together.

10. Despite everything we’ve said about the big stages, Portishead’s Friday night performance was in equal parts beautifully hypnotic and full of menacing splendour.

But maybe we felt this more (because music is about feeling as much as it is about sound) because we were much closer to the front when they played.

YES thank you for mentioning Portishead! (also full of the aforementioned 'illegal drugs omg' twats.) They were absolutely incredible, Beth Gibbons is unreal.

"Hipster review." I assume you mean you think it was written by a hipster rather than I revieiwed hipsters at Glastonbury ?

Anyway, the word hipster seems to have lost its meaning and just become an insult these days. But as a man in his forties with 2 children etc I'll happily accept the word hipster as a compliment - I don't get it much these days :) Hipster dad review perhaps ?

Oh yeah - and that's the way all hipsters are spelling 'reviewed' these days.