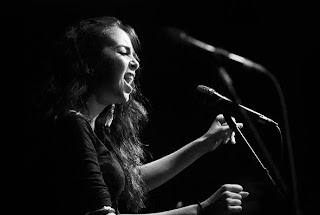 Amy Holford is a truly exceptional singer; if you haven’t heard her yet prepare to be seduced and stunned. She first came to our attention in 2012 but somehow slipped off our radar (yes we hang our head in shame there – music blogger fail) until a few weeks ago, when quite possibly the tallest blogger in the UK, Neil from Music Like Dirt posted a track that she’d recorded (I Won’t Wait – streaming below) for BBC Introducing Newcastle after having seen her live in London at the Camden Barfly. “It brought to mind seeing a lowly billed Adele at The Luminaire in 2006, not to suggest Amy is the next Adele but just in the disconnect between the sound you imagine will come from the girl with a guitar on stage and the beauty (and power) that follows,” Neil reported. He’s dead right.

For Amy’s voice is the full of the stuff primed to stop you dead in your tracks. It’s soulful, oozing with depth, utterly composed and achingly gorgeous. It almost seems astounding that she’s not already having huge selling LP’s. In fact as yet she hasn’t even released a single, but with a talent like this there’s no need to rush things. The best music lasts forever. Patience will be rewarded.


Having quit university to concentrate on her songs Amy has already racked up supports with the likes of Willy Mason, Lucy Rose, Jake Bugg and Newton Faulkner and has now moved to London. Having impressed one of our blog peer group a few weeks ago we’re pretty sure that it won’t be long before Amy’s magic casts itself even wider. Is it too early to start suggesting she’s One to Watch for 2014? Go on then. Simon Cowell would kill for someone like this. Keep your evil hands off Simon.