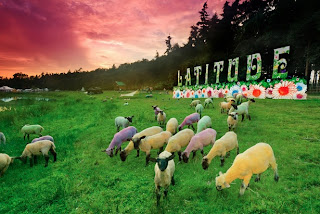 Before we get back down to our core business of new music blogging, it’s time to look ahead to the 18-21st July and the next festival that we’ll be reviewing and quite possibly tweeting from as well; Latitude. Having started in 2006 Latitude has now become a regular fixture on the UK Festival scene. It will be Breaking More Waves 3rd visit to the festival.

Latitude’s strap line is ‘more than just a music festival.’ Whilst many festivals now make similar claims Latitude is probably one of a handful where the claim is 100% accurate. It really is possible to visit, not see any music at all and still come away with a very full experience over the events three and a half days.

Going to Latitude is a little bit like a trip to London’s South Bank by the Royal Festival Hall, except in the Suffolk countryside and without the London Eye. For besides the music you’ll find arena’s dedicated to comedy, literature, theatre, poetry, and film all featuring heavyweight line ups.

This year the comedy includes the likes of Sean Lock, Dylan Moran, Russell Kane and the one and only Eddie Izzard. The literature and poetry line-up has the likes of Germaine Greer, Mark Thomas, Stuart Maconie, Carol Ann Duffy and Thurston Moore. Then there’s collaborations between Neon Neon and The National Theatre Wales, productions by the Lyric Hammersmith, Greenwich and Docklands International Festival and Watford Palace Theatre, The Balletboyz presented by Saddlers Wells, film such as From The Sea To The Land Beyond with a score by British Sea Power and a Q&A session with Ben Wheatley director of the fantastic black comedy Sightseers (go watch it if you haven’t done so yet) together with his new film A Field In England plus site specific art by the likes of David Shrigley. Then of course there’s the coloured sheep. And that lot only just touches the surface.

With that bill it’s easy to understand why Latitude gets touted as a ‘middle class festival’ and certainly there’s an element of truth in that, but with ticket prices being comparable to the likes of Reading and Leeds arguably it’s no more middle class than those ‘band in a field, drunk teenagers and not a lot else’ festivals. And who cares about class anyway? We just care about great festivals.

But this is a music blog and so let’s for a moment focus on that. Besides the ‘middle class festival’ tag it sometimes attracts Latitude also gets the ‘serious music fans festival’ one as well. We hate the idea of ‘serious music’. It’s like having a ‘serious boyfriend / girlfriend’. It makes it sound as if things aren’t going to be enjoyable anymore. We'd rather say that Latitude has a well curated line up that focuses on the slightly more leftfield, with occasional flourishes towards the mainstream. The chances are if you enjoy listening to BBC 6 Music then Latitude is the festival for you and this year in a turn of events that makes absolute sense the station are sponsoring one of the stages.

If besides credible bands you desire brain pulverizing dance beats and DJ’s then Latitude probably isn’t going to be your cup of tea / pint of cider / bag of illegal drugs (we’d suggest Bestival for that eclectic mix). However if the likes of Kraftwerk, Bloc Party, Beach House, Daughter, Bobby Womack, Yeah Yeah Yeahs, Cat Power, Foals and Grizzly Bear tickles your fancy then grab yourself a ticket quick. Dance music is represented but in small doses; this year Rudimental and Disclosure both appear on the 6 Music stage for example.

In total there are four main music stages; the main Obelisk Stage, The BBC Radio 6 Stage, The lovely i-Arena situated in a shadowy glade in the woods and The Lake Stage. Here is one selection from Breaking More Waves from each stage that we recommend seeing if you’re going, with a bias towards (mainly but not exclusively) electronic music. We'll certainly be watching all these acts - line up clashes permitting of course.

4 ageing, balding German men standing motionless behind podiums pressing a few buttons may not sound like the most enthralling of live spectacles, but that’s where you’re wrong. Throwaway your preconceived ideas of what makes a good gig and witness the gods of electronic music as Saturday’s main stage headliners bring their critically acclaimed 3D live show to Latitude.

When we caught iamamiwhoami’s first UK show in London last year we really didn’t expect it to be one of the most captivating live performances we would witness in 2012. It was. The question is can Jonna Lee and crew turn the mesmerising performance we saw in a seated concert hall venue into something that works at a festival? It will if nothing else be intriguing to find out.

They’re the 3rd most blogged band by Hype Machine listed bloggers so far this year. They’re quite possibly our favourite new electronic pop band of the last five years. We love Chvrches and so should you. Simple.

When it comes to end of year lists Georgia Ruth’s debut album A Week Of Pines probably won’t show up on too many, simply because not enough people have heard it, but at this rate we’re fairly confident it will find a place on Breaking More Waves'. A distinctively beautiful work, Georgia Ruth mixes songs sung in her native Welsh tongue with English ones to construct harp touched folk music that is in equal parts delicate and bold.


As usual we’ll be bringing you 10 points we learnt / a review of the event shortly after Latitude 2013 ends.
Posted by Breaking More Waves Blog at 08:30