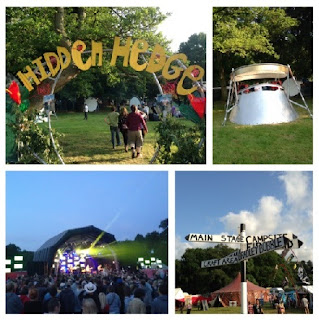 Pulp's Jarvis Cocker once sang about 20,000 people somewhere in a field in Hampshire on the pop classic Sorted for E's and Whizz.

Blissfields festival may be in the same county but doesn't have quite the same number of people. However, it still provided for a rather magnificent couple of days of music and revelry. Here is our Blissfields 2013 review or as we’d rather put it…

1. It’s not the size of the wand but the magic that’s in it.

Just over a week ago 180,000 people crowded onto Worthy Farm in Somerset for Glastonbury (our review is here). At around 1/50th of the size Blissfields could never offer the Rolling Stones, Arctic Monkeys or Mumford & Sons (although in 2009 the Mumford boys did grace the festival’s stage and cement its reputation as an event for stars of the future). However, it’s partly Blissfields size that made it so appealing. 30 minutes walk through the crowds from one stage to another?  Not at Blissfields. You could reach any part of the site within 5 minutes. Plus small doesn’t in this case mean lack of quality. In fact the Blissfields line up read like a roll call of artists covered by Breaking More Waves: Bastille, Matt Corby, Chlöe Howl, The Staves, Public Service Broadcasting, London Grammar, The Other Tribe, Blaenavon and Fenech-Soler (who we stream below) to name just a few. Plus there was cinema, DJ’s playing from an open top red double decker bus, a wedding, candy floss from a pram, independent traders and stalls, hammocks, a kids area, sack racing, custard pie fights, real ale, strawberry cider, punters dressed as Hobbits, superheroes, Edward Scissorhands and Ghostbusters and a weird mutations in an area known as the Hidden Hedge…

2. Never judge a band on just one performance.

Such is the case with Chlöe Howl. A few months ago we watched her perform what seemed like a decidedly average set in a pub in Guildford. Fast forward to Blissfields and Chlöe’s band sounded punchy and lively, her performance to a sun drenched crowd being kick ass and hip swinging. She now looks like a pop star in waiting who means it.

3. Never judge a band on just one performance (part 2)

Having been one of our highlights of both The Great Escape and Glastonbury festival London Grammar’s main stage set on Saturday afternoon was one of our most eagerly anticipated. Unfortunately the band’s sound had none of the clean weight and drama of those previous shows and a percentage of the youthful chattering audience appeared to want to burn off energy to something fast and bouncy, not listen to something a little more downbeat and melancholy. Hannah Reid’s vocal was still intoxicatingly powerful though, almost dwarfing her two band members’ music. There will be bigger and better shows by this band; Blissfields just wasn’t their day.

5. Weather learning 2: Gloriously sunny weather can work against bands just as much as torrential rain can.

Even the most hardcore of festival goer will find a few days of constant exposure in the sun hard work, so the trees that spread their inviting shadowy quilt over the grass about thirty metres from the main stage became a haven for many a punter. It did however create the rather bizarre scenario for a number of acts such as Thumpers and Marika Hackman who took to the boards early on in the day playing to a largely empty space in front of stage, with most of the audience sitting in the shade some way back.

Sam Smith demonstrated why he is one of the finest new UK vocalists on the scene with a set that included his stripped down version of the track that first brought him to prominence - Disclosure's Latch - but admitted he wasn’t even wearing any sunscreen; and he certainly wasn't wearing any shorts. Neither was pretty much any other act we saw. Trousers seemed to be the order of the day on stage. Maybe musicians want to sweat for their art? The exceptions were Blaenavon who showed that besides some dextrous indie guitar riffs they also were quite literally ‘cool’ and exposed their legs for their set in the Bradley Bubble stage.

7. Weather learning 4: If you want a dry sunny festival, Blissfields seems the one to do. Guaranteed. Possibly.

We’ve now attended six times and with the exception of what could be at best be called ‘wet air’ on one morning of 2012 they’ve all had rather beautiful weather. Who said UK festivals were always a mudbath?

8. Before you decide to climb a speaker stack, make sure you’re not afraid of heights.

Bastille came back to Blissfields for the third year in a row as triumphant headliners and delivered a perfectly paced set that sweated off everyone’s suncream. Wherever you looked there were people on each other’s shoulders; they undoubtedly drew the biggest crowd of the weekend. Finishing with their cover of Rhythm of the Night and big hit Pompeii plus some end of set fireworks they sent both the faithful and the curious away with big smiles. A rendition of Happy Birthday to their drummer Woody sung by the whole audience and Dan Smith climbing the speaker stack to announce “fuck it’s high,” were other rather comical highlights.

The above statement is a cliché that seems to attach itself itself to nearly every festival these days, but we can’t imagine there are too many others that have blacksmith and wood carving demonstrations.

10. As many festivals struggle to sell tickets in 2013, it’s still possible to sell out without 'selling out'.

Blissfields appears to have a strong booking policy both in terms of selection of new rising artists and developing good relationships with them so that they want to come back and play again, for example this year Bastille, Fenech-Soler and Dub Pistols. It seems to make punters want to do the same. There’s also a sense of an organising team who do it for the love rather than huge profits (festival founder Paul Bliss was found up on the main stage introducing a number of the bands and seemed genuinely enthusiastic about them and was spotted all around site enjoying the music).

It may have increased its capacity from its original tiny back garden beginnings, but having learnt lessons from their cancelled over expansion in 2008, Blissfields knows not to over stretch itself, be realistic, do what they do well and as a result sold out a long time before the gates opened.


Blissfields 2013 – a scorching success in every way.


Here's one of the musical highlights, Fenech-Soler and Magnetic.