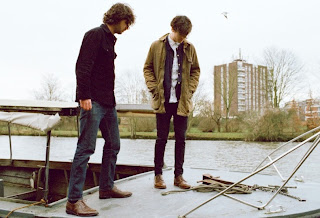 This is a new video from Champs. It’s been floating around the internet for a few days now, but our ‘no more than 2 blog posts a day’ rule means that it has had to take a back seat for a while. We apologise for this, but only if you’re the sort of person that demands that you hear everything on the day that it is released because you have to remain ‘relevant’. If like us you’ve still not got round to listening to every David Bowie album (well Tin Machine to be exact) you’ll know that being ‘relevant’ is actually pretty irrelevant in the bigger picture.

So here’s the video for My Spirit Is Broken plus some things you might like to know about it.

1. The video is (if you live in the currently sweltering UK) perfectly timed as it features the band jumping into swimming pools with their clothes on. Now wouldn’t we all like to do that right now?

3. The video for My Spirit Is Broken was filmed in one of the most marvellous towns in the UK – Ventnor, Isle of Wight, a place where time seems to have stood still for the last thirty years and mass commercialisation by the corporates has hardly had any effect at all.

4. Ventnor in the Isle Of Wight is also an incredibly important location because it was the very place where the author of Breaking More Waves was conceived. (Near the top of Zig Zag road for anyone that’s really interested, but probably this is too much information).

5. Champs are playing Bestival this year, which is also on the Isle of Wight.

6. My Spirit Is Broken is one of those simple effective songs that just gets us every time. Classic songwriting, harmonies and a tinge of melancholy, really what’s not to like?

7. You can get the song for free from the bands website (here).We'll repeat again, really what's not to like about that?

Champs - My Spirit Is Broken (Video)

Email ThisBlogThis!Share to TwitterShare to FacebookShare to Pinterest
Labels: Champs