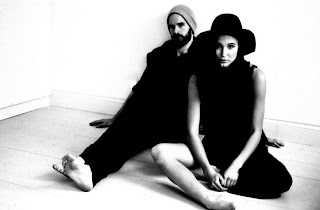 “Sweden makes the greatest pop music in the world,” blah blah blah. “The UK over the decades has been a huge contributor to contemporary pop culture considering its small size,” blah blah blah.

According to the book of pop music cliché, by rights K.I.D.S should have it easy making amazing pop music, seeing as they consist of a Brit and a Swede. They even put dots in between the letters of their name which surely means that they can make A.M.A.Z.I.N.G pop music.


You may remember Charles and Rosanna (for they are K.I.D.S) from the tracks Ragged Old Angels or All My Evil which we featured last year? Now prepare to have your ears gloriously assaulted by Kiss And Play Dead. If for a moment you consider that music is like making love in a condensed 3 minutes, then the first fifty seconds of this tune are the tentative foreplay before (BAM!) something suddenly clicks and everything is rocking. Eargasm achieved at an early stage. It doesn’t stop at that point by rolling over and going to sleep though. No sir, Kiss And Play Dead gives you its full attention for the full length, and what a glorious length it is. It’s like Krautrock gone pop. It’s like Electrelane, The Cardigans and Explosions In The Sky banging away on a grey cloud full of rain together.

If you like pop music, but you like it dirty and forceful, Kiss And Play Dead is for you. We’re going to stop now before we get over excited.

Email ThisBlogThis!Share to TwitterShare to FacebookShare to Pinterest
Labels: K.I.D.S