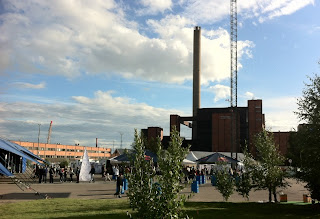 So far in 2013 Breaking More Waves has been previewing and reviewing UK festivals. However, come August we’ll be putting the blog on hold for a few weeks whilst we take our summer holidays. Of course our holidays wouldn’t be complete without some music and so from the 7th-11th August you’ll find us in Helsinki, Finland for our second ever visit to Flow Festival.

The organisers of Flow describe it as both ‘a mental and physical state of being, where feeling flows collectively through music into a larger entity.’ Wow and there we were thinking it was just a bunch of bands playing some tunes.

Flow Festival is located at the historic Suvilhati ex-power plant area in Helsinki. This is very much an urban festival; the landscape here is one of concrete, metal and masonry. Tall chimneys rise up behind the stages and huge cylindrical gas towers form an industrial landscape that is almost apocalyptic in nature. Those looking for the hippy spirit of the healing fields at Glastonbury won’t find it at Flow, although 25% of the energy at the festival is produced with renewable energy and one stage (the Black Tent) will run 100% on wind power. There’s also a strong recycling policy on site and Flow is easily the cleanest festival we’ve ever attended – quite simply the Finns don’t drop their litter.

The tenth edition of the festival features a range of artists from both the Finnish and international scenes. Amongst the international acts scheduled to play are Kraftwerk with their absorbing 3D show, Grimes, My Bloody Valentine, Nick Cave & The Bad Seeds, Alicia Keys, AlunaGeorge (their debut LP Body Music is released today and we’re streaming the track Best Be Believing from it below), Haim, Kate Boy, Disclosure, Mount Kimbie, The Knife, Cat Power, Kendrick Lamar, Austra, Of Monster And Men, Azealia Banks, Beach House, Factory Floor and Hudson Mohawke. Finnish acts playing that may be known to worldwide music fans include the rather excellent Rubik, K-X-P and Black Lizard.


Besides the music Flow also utilises its dramatic setting with interesting spaces and lighting plus quality food and drink. For example Flow is probably the only festival we’ll attend this year that has a large Champagne bar and amongst its food choices there is organic black bean soup with tomato and avocado salsa and half a grilled lobster and charmoula. A greasy burger with onions at Reading festival Flow is certainly not. It’s why you’ll find us there. Keep an eye out for our review shortly after Flow finishes, but in the meantime catch a couple of really short teaser videos of the festival below.