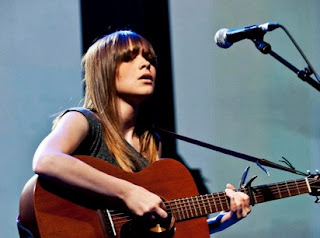 UK teen drama Skins may have received criticism over the years for being somewhat unrealistic (but then frankly who wants realism – watching a real spotty teenager updating Facebook and watching You Tube videos in their bedroom doesn’t make compulsive television viewing) and having stereotyped characters but it was to a certain degree innovative and set a direction for similar shows. In years to come we suspect it may be remembered fondly and be seen as defining a certain generation of youth TV viewing. Certainly a number of the shows stars have gone on to bigger and better things, notably Dev Patel for the award winning Slumdog Millionaire and Kaya Scodelario who has appeared in numerous films.

A key component of Skins was / is the soundtrack. The Gossip probably owe quite a bit to the programme for an increased UK audience for example.


As the final episodes air we now find established or semi established artists premiering their tunes via the show and Gabrielle Aplin is one such example. Not content with releasing a rerecorded version of the song Home as a single and getting Salvation (our favourite song from her debut album) on the trailer for the movie Diana, last night a new track Start Again got the Skins treatment and was then uploaded to the internet. Yes, it’s a little beauty full of soft guitars, Gabrielle's intimate soft vocal and piano tinkles and you can hear it stream below.