The Night VI - Thinking Of You (Video) 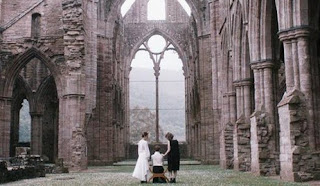 Breaking More Waves policy of only posting one or two tracks a day, one at 8.30am GMT regular like clockwork, the other (if there is a second) at some point in the evening has caused us a particular problem today with seven pieces of music that we really want to push forcefully into your ears. However, our eventual decision came down to three key criteria:

1. Of the seven songs this one is the best.

2. The Night VI are a band that we suggested were ones to watch in 2013 and so by then not posting their first official video would make our recommendation a little hollow. It would make us a little like one of those people that attends a gig and when a particular song comes on they declare that it's their favourite, then talk to the person standing next to them all the way through it.

3. We may have already posted the song in Soundcloud form, but think that sometimes we have to bang on a bit about certain acts for our simple message of THIS IS GOOD. YOU SHOULD LISTEN, WATCH AND SHARE to get properly through to people.


So let’s just repeat that shall we. THIS IS GOOD. YOU SHOULD LISTEN, WATCH AND SHARE. You should particularly do so if you like ruined cathedrals (who doesn’t ?), frilly collars (nearly as good as big chunky collars) and bands doing nothing in particular but staring meaningfully in an effort to give them some sort of artistic gravitas (our favourite form of staring). Thank you.

The Night VI - Thinking Of You (Video)

Email ThisBlogThis!Share to TwitterShare to FacebookShare to Pinterest
Labels: The Night VI