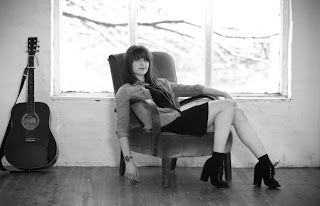 Yesterday we went a little bit off-piste and introduced a hip hop act, not the sort of thing that often finds its way onto Breaking More Waves. Today we find ourselves on much more familiar territory, with a singer songwriter who has made us sigh gently with ear-contentment. Say hello to A Girl Called Ruth.

A Girl Called Ruth is like the musical version of Ronseal, her name doing exactly what it says on the tin; she’s female and actually called Ruth. Whilst Ruth is a lovely name it’s easy to guess why she’s chosen not to use her full name; the surname Bullock isn’t the most glamourous after all (apologies to any bovine or Sandra fans out there plus Ruth herself if she likes the name). Maybe A Girl Called Ruth should get married quick and take her husband’s surname, although as she’s admitted in one interview, with men she usually makes a mess of things or ends up getting hurt, so maybe that won’t be happening so quickly.

So until she’s writing songs about weddings let’s focus on what she’s done so far. The tune that’s really grabbed our attention is her new single Lullaby. It’s not a cover of The Cure classic, but instead the lyrical content follows Kate Nash’s 3AM, dealing with that moment that in the words of Faithless you “can’t get no sleep.” (A weird double negative if you think about it). On its very first play we were instantly besotted. It’s a lovely tune with Ruth lilting and purring of the problems of circuses in her head and counting sheep not working; it makes us want to run over to her and tell her everything is going to be OK and make her a Horlicks.

There’s some other tunes on her Soundcloud as well which vary stylistically; Stuck On You is a big belting pop / rock song with a big American influence; we hear a bit of Avril Lavigne in there, although someone else close to us suggested it was more a Diana Vickers influence. We’re not sure if anyone would actually be influenced by The Vickers, but then as A Girl Called Ruth has admitted a love of The Vengaboys anything is possible. Another track Happy Song takes a more acoustic slant, whilst You I See features some rather magnificent shoegaze guitar effects in places over a straightforward and accessible pop / rock song. Well worth checking out is the Nixon remix of this track, which has already done the business on Hype Machine with just one blog Write.Cook.Click.Listen (a food and music blog - our yummy idea of heaven) posting and amassing a lot of love on the premier music blog aggregator.

But for now take a listen to the song below. Lullaby by A Girl Called Ruth is our new favourite and very welcome earworm.

Email ThisBlogThis!Share to TwitterShare to FacebookShare to Pinterest
Labels: A Girl Called Ruth

Not sure if its odd to comment on a blog written about myself - But fuck it cause its a bloody lovely blog! Shall print and keep as a reminder during self doubt! You did your research! I like it! And the Horlicks made me LOL (Oh yes I just said Lol...)

Oh and spot on with the Bullock - Sounds more like someone that would do your accounts more than hit the stage singing. Sandra just stylish pulls it off though!