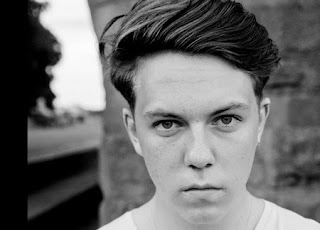 Today we’re introducing our third and final new act of the week on Breaking More Waves. Give a cheery wave to Saint Raymond.

As we’re just getting introduced we’ll keep this simple. There’s plenty of time to do some deep intellectual analysis of his music and pretend we’re Pitchfork later; after all he’s only getting started. Here are 8 things you need (or at least might need) to know about him.

1. Saint Raymond isn’t actually called Saint Raymond. He’s called Callum. We feel sorry for his parents who probably agonised for ages over the name of their baby boy, only for him to ditch it as soon as he thought a few people might get to hear it.

2. He’s a solo male singer songwriter from Nottingham. This means that he’ll probably get touted as the new Jake Bugg, even though he’s nothing like Jake Bugg except being a man from Nottingham that sings.

3. He’s been doing it with Gabrielle Aplin; touring that is.

4. Gabrielle Aplin’s been doing it with him as well; that is she’s been releasing records with him. His rather good Escapade EP (his debut) was put out via Gabrielle’s own Never Fade label this spring.

5. He played at the Great Escape Festival in Brighton in May in the Unitarian Church and returns to Brighton on his own mini UK headlining tour this September and October (other towns and cities are available).

6. He’s not ‘big on the blogs’ because (we suspect) he’s not the kind of artist that as a generalisation bloggers would like. Yet we suspect that he doesn’t really need blog approval or support to do very well indeed. The You Tube stream of Fall At Your Feet from the EP has already had 45,000 plays and judging by the comments underneath it he’s already developing a crossover fan base from the likes of Gabrielle Aplin and Lewis Watson – both of whom seem to be doing very well without the likes of Hype Machine and buzz blogs writing about them. But irrespective of what the blogs think, this tune about that feeling of wanting to do anything for that other person in your life has got us tumbling over and over. “Watch me fall at your feet, give it all to make you feel complete,” he sings over a jubilant and jaunty indie pop backing before adding a twist “who am I trying to please?”

7. There’s a bit on Fall At Your Feet that sounds a little bit like the “oh oh oh” bits on Glockenspiel Song by Dog Is Dead. This is a good thing.