Little Boots - All For You (Acoustic) 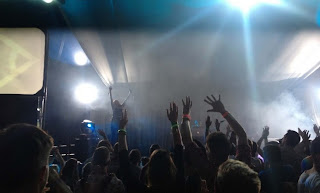 The last time we featured Little Boots on Breaking More Waves we were rather hopeful that her second album was going to deliver. It did. Most importantly, unlike her debut Hands it works as a consistent and singular piece of work, bringing a twilight dance floor sound that is both minimally cinematic and yet full pop hooks. It manages to be both darkly sophisticated and yet full of neon lit insistent hooks all at the same time.

Add to that her part live / part DJ / part remix project - Little Boots Discotheque - which recently turned the Pussy Parlure Nouveau tent at Glastonbury festival into an ecstatic hands in the air rave-off for fans (see picture above) and you have a musical sum that scores high. We think it’s fair to say that whilst the hype mongers and next big thing crew have long deserted when she didn’t fully match up to their expectations on album one, those of us who have stuck around have finally been well rewarded.


Now after the synths, the laptops, the keytars and the tenori-on’s Little Boots takes things back to the core with this live acoustic version of album track All For You recorded in the Union Chapel, London. “The song is one of the most personal on the album, I wrote it with Andy Butler from Hercules and Love Affair and was inspired by some of my favourite artists like Kate Bush and The Pet Shop Boys,” says The Vickster of the track. This is audio heaven. We heart Little Boots.


Little Boots - All For You (Acoustic Live Video)