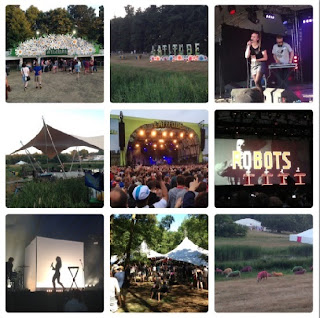 If we were to use two words to describe Latitude festival they would be civilised and tasteful. Even those who have had a little too much to drink are more likely to be found supping them from aesthetically pleasing eco-cups patterned with butterflies and flowers, whilst swaying gently to the likes of Beach House, Daughter or James Blake than they are staggering and barging their way through the crowds with a can of extra strength cider in hand. And if there is any barging or bumping to be done it will probably be with a very polite apology.

Latitude is the kind of festival where it feels perfectly acceptable to drink a latte whilst watching Tim Burgess or the Cat Power. However if this sounds like a criticism, as if a festival can only be great if it has rock n roll excess and debauchery, then think again. For Latitude is very much a festival of the modern era and that means taking home a wealth of cultural experience rather than a hangover and an STD. Its strapline is ‘more than just a music festival’ and with a focus on contemporary arts across the spectrum from cinema, theatre, comedy, poetry and literature that tag is very true.

Let’s define Latitude with this comparison: If Latitude was a newspaper it would most definitely be a broadsheet. If it were a radio station it would be 45% BBC 6 Music 25% Radio 4 20% Radio 1 10% Radio 2 and 0% Capital. But it’s not, it’s a music festival and it’s a wonderful one at that.

Here is our review of Latitude 2013 or rather, 10 things we learnt at Latitude….

10 Things We Learnt At Latitude

Take back everything we said about Latitude being civilised. Scottish synth pop sensations Chvrches late afternoon set at the beautiful i-Arena (a stage set under an aesthetically pleasing architectural canopy in the woods) found a rather fervent audience creating a circle pit and moshing like some warped version of Reading and Leeds without guitars. With pulses and echoes of Giorgio Moroder, Prince, Human League and Purity Ring in their sound (depending on which song was played) bodies became quickly lubricated with euphoric electronic joy. We make no bones about it; Chvrches are the best pop band of the last five years.

Surely the award for best festival toilets of the year has to go to Latitude. By taking standard portaloo and long drop lavs, along with male and female urinals, placing attendants at each toilet block (who regularly cleaned them and stocked them with toilet paper), dividing them into male and female sections and at the busier toilet blocks having separate entrance and exit points, queues were minimised and fast moving and the loos themselves were impressively clean compared to other festivals.

3. A full stop is more powerful than a question mark. Or is it?

Thanks to poet Rob Auton for that thought in the poetry tent.

By now pretty much everyone knows the criticisms of Kraftwerk live. “It’s just 4 blokes standing behind neon lit workstations doing nothing – they’re probably checking their emails.” “Electronic music isn’t real music.” “It’s all just on tape and not live.”

But just for a moment cast those criticisms aside. Instead imagine a gig experience (and it really was an experience) that is totally immersive, where stunning and astonishing visuals float out from the stage in perfect synchronisation with the bands beautiful rhythms, simple melodies and textured electronics. For this is the world of Kraftwerk, a band who create something more than just a gig, something truly unique and something that is not without humour either, even down to the sight of 20,000-30,000 people standing in a field wearing white cardboard 3D glasses.

5. There are probably not many music festivals where you can watch a play in the woods about a dead cat in a plastic bag.

6. Bloc Party have some new songs.

Listening and watching Bloc Party’s headline set on Friday night reminded us just how good an album Silent Alarm is. The band also did the classic festival no-no and played some unreleased new songs. Someone needs to have a word with the band and suggest that maybe they should remain so. Maybe a re-release of Silent Alarm would be better.

Camping out in the film tent on Friday morning was the best decision we made all weekend. Starring Vicky McClure, Jonny Owen, Katy Brand, Martin Freeman and with the likes of Alan McGee, Huw Stephens and Carl Barat all playing themselves, Svengali is a film full of romance, comedy and emotion. It’s about following your dreams and having absolute belief in music you adore. If you’ve ever heard a new band, fallen in love with them and thought the world needs to know about this, then this film is for you, but more importantly it’s also about how sometimes even music isn’t the most important thing. Set in London and Wales with a cracking British soundtrack, Svengali is funny, but also seeped with melancholy and may even bring a tear or two. So far it has just shown at festivals but there is hope that it may get a wider distribution later this year. If it does, go and see it. The best British film about the music industry you’ll ever see.

8. Queen are the Matalan Led Zeppelin.

According to DJ, journalist, critic and TV pundit Stuart Maconie, who provided a very engaging and humorous hour of chat in the Literature tent, that also included why fell walking wasn’t hip at the NME in the 90’s and why The Smiths were the North’s  answer to Thatcherism but the South’s was Spandau Ballet. He certainly had a point when he said that the north probably got that one right.

9. Harps are the new rock n roll. (In a civilised Latitude way.)


In quick succession we saw Laura Mvula, Georgia Ruth and Coco Rosie. All were excellent and all were all bound by some plucking of the harp. Maybe the industry can start proclaiming ‘harp music is back,’ it would make a change from the usual proclamations that guitar music is back that we seem to get at the start of every year.


10. Even rain at Latitude is very civilised.

The majority of the weekend was full of summer sun, with the stages in the shady woods being a particular haven, particularly when we caught Sohn's set (track streaming below), where musical chills were added through goosebumps from his haunting electronic music. Yet even when it did try to rain on Saturday it was really nothing more than wet air. It was difficult to tell if we were watching clouds of dust rise from the dry land or rain fall from the sky. We didn't even need to put a mac on, let alone wellies.