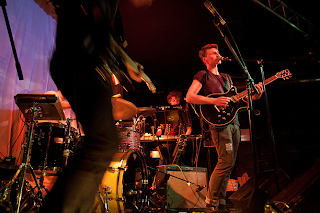 Have you heard of the blog-bubble? It’s a place where new music bloggers float around together creating the web 2.0 phenomenon that is the blog-buzz band. Frothed-up from a frenzy after just one or two songs appear on line or a group have played some smelly lager coated scuzzy east London toilet venue, the blog-buzz band typically finds itself at the middle of an internet stream of love that grows into river before ending in a pull-the-plug whirlpool as the cool kids move on, their hype thrills popped.

If you live or spend a lot of time in that bubble (UK version) you could easily be forgiven for thinking that London five-piece Zulu Winter are already playing three nights at Wembley Arena or a series of sold out shows at Brixton Academy such is the adoration eschewed on them by the usual crowd of upfront blogs. To be fair the band are actually playing Brixton Academy for real, but as a support slot to Friendly Fires, who are just one of the bands that Zulu Winter have drawn early comparisons with alongside references to Wild Beasts, Brian Wilson, A Certain Ratio, Trophy Wife, Cymbals, Foals and MGMT. Whilst we don’t think any of those pointers are 100% fully accurate, if you put all that lot in a pot and stirred it for a bit you’d actually be getting pretty close. It’s basically very tasteful indie music that grooves with just the right amount of subtlety, occasional falsetto melody and strategically placed atmospherics.

The debut double A side Zulu Winter single Never Leave / Let’s Move Back To Front which streams below is due for release on November 7. As with any new group only time will tell if Zulu Winter are able to raise their game further to find love outside of the blog bubble. Another song Silver Tongue (now removed from the internet) suggests they may be able to, but these two songs represent a decent start out of the blocks.

Let's Move Back to Front by Zulu Winter
Posted by Breaking More Waves Blog at 08:30