Music That Made Me #34 - Kate Bush - Wuthering Heights 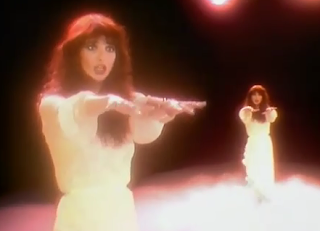 There are certain songs that we associate with particular memories, people or places. Much of this series is about that. It is after all the environment around us that affects the way that we think and act. None of us are so single minded that we are not altered by what surrounds us to a certain extent. To deny it just shows a certain lack of emotional intelligence.

Yet this song has no one singular memory for me. I vaguely recall hearing it or seeing it for the first time on Top of the Pops when I was young, but that memory doesn’t stand out as a singular special point in time. Instead Wuthering Heights – Kate Bush’s song based on the book of the same name - is a constant in my life. Even just a few weeks ago when I was at a festival and a young Danish band played a cover version of it, all it took was those first few recognisable piano chords to create goose bumps all over my body.

When any new slightly quirky female singer appears, there’s a fair chance that the Kate Bush comparisons will be rolled out again on this and many other blogs. It’s a cliché to use them but it shows how influential Bush was and continues to be. Wuthering Heights is one of the greatest songs ever created in the history of pop music. Every time I hear it, it creates a fresh memory.

Email ThisBlogThis!Share to TwitterShare to FacebookShare to Pinterest
Labels: Kate Bush, Music That Made Me