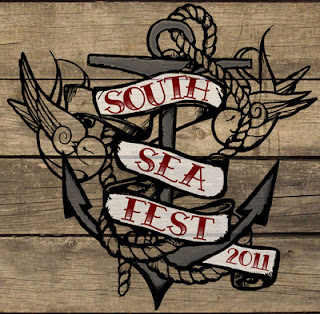 Southsea Fest is a fully independent, budget price, multi-venue festival that from small beginnings in 2007 has gradually evolved into a one day event of real merit, with the 2011 line-up unquestionably being its best ever. Throughout the bill you’ll find a strong card of emerging bands as well as the cream of local talent, plus the likes of past Mercury award nominated folk singer Fionn Regan and indie rockers Johnny Foreigner to give some weight through established acts. Previous years have seen the likes of Eliza Doolittle, The Joy Formidable and Pulled Apart by Horses play tiny 100 capacity stages at the event. This year will be no different with the vast majority of venues being pub sized with only Portsmouth’s hard serving music venue the Wedgewood Rooms (400 capacity) and the elegant and seated Edwardian Kings Theatre (capacity 1600) providing more breathing space. Then when the music finishes various after parties crop up in the area including the official Club NME after party at the Wedgewood Rooms with local DJ’s Rob Troubadour, Phil Harvey and a very special guest. To buy tickets use this link here.

Set on just one road in Southsea, Portsmouth, Southsea Fest is probably the least demanding festival you’ll ever experience in terms of distances to travel between stages – with virtually every venue being within a stone’s throw of each other. It’s this convenience and price (tickets being only £16) that Southsea Fest scores high against other similar events such as Great Escape, Dot to Dot and Camden Crawl.

Of course, like any multi venue festival, army style discipline is required if you want to ensure you see every band on the 100+ bill that takes your fancy, but these best laid plans can often go somewhat awry – every year you’ll inevitably see a number of paralytic local music lovers stumbling their way down Albert Road as the evening progresses, completely forgetting their carefully planned timetable. Talking of planning, the organisers include a ‘catch up break’ in the middle of the day to ensure that the better known bands in the evening do run to time. You can see this on the timetable in advance of Southsea Fest inside Portsmouth’s first edition of XYZ magazine which is located in the venues involved.

So to the music – as usual with our festival previews, we’re recommending some bands for to you see at Southsea Fest in audio and visual form. It may come as no surprise that of the 10 bands we’re suggesting 8 of them have been previously featured on the blog, and given the high quality line up this year some of them inevitably clash.

Fresh from supporting chart-star Ed Sheeran on his UK tour and due to support him again in Ireland later this year, this London dwelling girl born in Ireland produces acoustic folk songs brushed with huge dollops of emotion and soul. Get to Southsea Fest early and catch this captivating songwriter.

Local dark and stormy alt. folk rockers The B of the Bang hold a special trophy – they’ve played every single Southsea Fest to date. Following a number of summer shows including a local support slot to The Walkmen the group are currently recording their second album, the follow up to the warmly received Beginning Middle End. The track Alaska, streaming below, is taken from that debut.

The B of the Bang - Alaska

Winners of this year’s Glastonbury Emerging Talent Competition (where Breaking More Waves acted as one of the long-list judges) and signed to Communion records, the label founded by Ben Lovett (Mumford and Sons), former Cherbourg bassist Kevin Jones, and acclaimed producer Ian Grimble these country-soul-rockers will release their new single It’s About Time the day after Southsea Fest. Expect exquisite harmonies and spot-on musicianship.

Treetop Flyers - 'It's About Time'

Brighton’s Fear of Men play hazy, fuzzy indie pop like your dad used to like. It’s a little lo-fi, a little d-i-y (as in self-produced not purchased from B&Q or Homebase) but there are melodies that swirl around in the mix in a rather glorious way. We’ve already given the band the thumbs up for their single Ritual Confession, released in August here (video below) and the band have been getting tongues wagging on some of the best UK new music blogs besides this one.

Formed from the battered remains of previous band Holdfast, Curxes blend of female vocal synth-noir sounds like Depeche Mode climbing into bed with Zola Jesus and all sorts of big voiced rumpy-pumpy going on. Despite having released just a handful of tracks they’ve already found blogs from the U.S.A, Spain and the UK falling absolutely in love with them and the buzz is almost sure to build further as this duo demonstrate how accomplished they are in the live arena as well as in the studio.

Foe is one Hannah Clark from Fleet, Hampshire, previously a member of the band Arthur. She has recently signed a record deal with Mercury imprint, Vertigo records. An album should see the light of day next year. Her recent single Deep Water Heartbreaker is a trashy, dirty, slashy sounding mix of guitars and electronics that sounds a little like the band Garbage with an undercurrent of attitude laden pop.

Genie In A Coke Can (ALEC EMPIRE RMX) by FOE

Making only their second appearance outside of London Pris are inspired by knee high boots, Manic Street Preachers, vodka, Courtney Love, bright red lipstick, Kenickie, leopard print, Jilted John and mascara to name but a few. Having had their indie-punk-pop demos noticed by Everett True (the ex NME/Melody Maker journalist who wheeled Kurt Cobain on stage at Reading) and a handful of leading Brit music blogs such as Von Pip Express, Just Music I Like and this one, the band have released their debut single The Better You Look The More You See, received play from Steve Lamacq on BBC 6 Music and got listed on the Music Week playlist. Likely to tear up the stage with pouting, glamour and tons of self-belief, Pris are a must see racket.

If you fancy something a little more musically polished that Pris, then Worship may be your thing. Having first featured on this blog near the start of 2010 this Berkshire based band play absorbing and epic indie rock with modern beats that throw a small nod towards Radiohead. Last year the band played a session for Rob da Bank’s Radio 1 show before heading to Norway to record new material. This year they’ve played the BBC Introducing Stage at Glastonbury, been featured as The Guardian’s new band of the day and found their song Collateral, which we blogged last year (here) being play listed on Radio 1.

The Midnight Sun by Worship

Some of the things we’ve said about Clock Opera over the last 2 years. “Like a wonderful drug it makes every day sound perfect. Go take some. (2009)”. “One of the finest pieces of music you’ll hear this year. You’ll never forget this.” (2010). “A stimulating and rousing piece of work that is worthy of every ounce of praise we can load onto it.” (2011) Clock Opera are a glorious band. They take electronic samples, chop them up and splice them together again to create wonderful mini-symphonies. It’s their second time in Portsmouth having previously supported Yeasayer at the same venue. If you missed them then, don’t waste this opportunity.

Bringing Ibiza to the world of indie with clattering tropical rhythms, plenty of cowbell and a carnival sweatiness Geordie dance-pop three piece Polarsets will make you consider dancing your pants off. And why not, it will almost be the end of the night after all? Just make sure, even if you did end up naked, skinny dipping on Southsea beach at the end of the night that you're not too hungover in the morning. Talking of Morning....