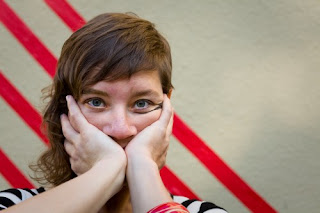 We tweeted about this last night, but stuff gets lost so quickly in amongst the busy chitter chatter of the internet that we thought it best to blog this new video for one of our favourite tracks of the year as well. With her mighty gobby primitive roar Merrill Garbus aka tUnE-yArDs is one in a million and this song, a clattering lurch of loops and bassy grooves is experimental, odd and yet irresistibly brilliant. Imagine if all pop music was as adventurous as this. How bloody brilliant would the world be?

We’ve said it before and we’ll say it again, expect to see tUnE-yArDs album Whokill cropping up on a number of end of year lists, including our own.

Email ThisBlogThis!Share to TwitterShare to FacebookShare to Pinterest
Labels: tUnE-yArDs