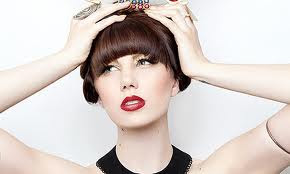 If our love of Queen of Hearts music was a real relationship, we’d have probably got to that ‘starting to get to really know each other but not fully’ stage now. We’ve drunk enough of her tempting charms to fathom her, yet she remains exciting and still slightly mysterious – we still don’t even know her real name.

Now comes that moment of introducing this relationship to the world at large – because Queen of Hearts ‘arrives’ on the October 3 with her debut EP – Arrival. It's taken 9 months to nuture this baby since she first appeared on Breaking More Waves, but the most important ingredient of all things tasty is time. The EP will feature the previously blogged songs Freestyle and Where Are You Now, plus the unheard Black Star and Shoot the Bullet (the titles of which sound suspiciously like heavy rock anthems – although somehow this seems highly unlikely) plus this cover version of Foals best song – Spanish Sahara.

This version turns the sweaty indie boys moment of expansive calm into a sultry and very feminine piece of electronic pop music, which should bring this lustrous song to a whole new audience. For now it’s free to download by clicking the arrow below – why not do so and then introduce your friends to the Queen. Soon she could have more potential lovers than she could care to choose from.

Spanish Sahara (Produced by DREAMTRAK) by Queen Of Hearts
Posted by Breaking More Waves Blog at 20:30

Fabulous version. I heart this.