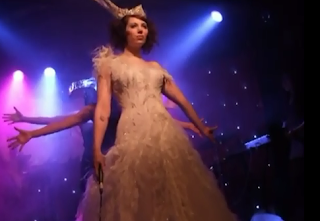 A couple of points - first, does anybody remember t.A.T.u? We loved t.A.T.u. Not only did they manage to get everyone a bit hot under the collar with their faux-lesbian antics and full on nudity / shooting pregnant women shock tactic videos but they were (possibly) the inspiration for the drunken capital letter mix up that is tUnE-yArDs.

Second ‘the kids’ love a bit of electronic heaviness don’t they? It really is the sound that defines our times.

So just imagine if you had a song that was just a little bit dubstep influenced and sounded just a little bit like t.A.T.u. That would be pretty incredible wouldn’t it? Well here it is. It’s called Black Star. It’s the chorus that makes us think of t.A.T.u – the high vocal part reminds us just a tiny bit of the hook from Not Gonna Get Us.

Produced by East London boys Olly and James who go under the name Devil’s Gun, Black Star is less pure pop than most of Queen of Hearts previous output, although the t.A.T.u moment (as we will now forever refer to it) burrows its way into the brain with some finesse. For those worried that the Queen has turned and is about to ‘go dubstep’ full-on, have no fear though. “No plans to do any dubstep. I'm synth pop through and through,” she noted on her facebook recently.