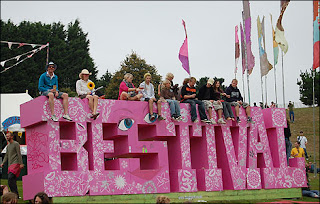 There are 2 major music festivals on the Isle of Wight. The first, is referred to by locals or 'caulkheads' as they are sometimes known as simply 'The Festival.' The second as 'The Bestival.' There's a big observational hint in the names as to which one is superior.

Exciting, eclectic, eccentric, Bestival (to give it its proper name - there is no 'The') is undoubtedly Breaking More Waves favourite festival in the UK. Rob Da Bank’s crazy village fete / rave / gig on the Isle of Wight is a ‘must do’ date on our calendar. From the first sparsely attended event in 2004 where we watched reggae band Ori-Jah-Nal battle with wind, cold and rain to a crowd of no more than 30 people on the main stage to the 2011 spectacular where 50,000 people will descend on Robin Hill Country Park and its surroundings to witness the likes of The Cure, Public Enemy, Bjork, PJ Harvey, Mogwai and Fatboy Slim (who incidentally appeared at the 2004 event), Bestival has come a long long way.

Bestival has demonstrated how it’s possible for an independent festival other than Glastonbury to increase its capacity, sell-out and still maintain plenty of character - an endearingly madcap music show – against the corporate behemoths such as Reading and V Festival. We mention Glastonbury because there’s no doubt that Glastonbury has inspired many aspects of Bestival. In fact if we were pushed for a succinct description of Bestival we’d describe it as a smaller, less mainstream version of Glastonbury. For example this year you can, like the previous two years, witness Glastonbury stalwarts Arcadia and their stunning arena – an industrial looking 360 degree DJ stage which shoots giant 30ft flame balls from its spire and is surrounded by 12 fire breathing lamppost tree sculptures, this time located in the far reaches of the campsite.

New for 2011 there’s also the Swamp Shack, which organisers describe as “a ramshackle Louisiana bayou juke joint, topsy turvy on rickety stilt-legs and wreathed in dry ice populated by an interactive cast of True Blood-style Deep South vampires, fading Southern Belles and a host of other unwholesome night-crawlers. The venue will also play host to some of the best bands and DJ sets from the UK underground, headline appearances from some very special big-name acts and late-night live drumming old skool Jungle sessions.” It’s created as collaboration between Glastonbury Trash City co-creative director Ruby Blues and Block 9, the set-design pioneers behind the legendary NYC Downlow Gay bar.

Add to this the new roller disco area ,the Rizlab arena where Friendly Fires will experiment and collaborate with artists that have influenced them both past and present, the Psychedelic Worm and Sailor Jerry’s Ink City hosting some of the best new bands (some of whom have appeared on this blog), and many more stages (we haven’t even mentioned the Main Stage or the Big Top the two biggest arenas) and it’s easy to understand why so many people are now choosing Bestival as their festival of choice.

As always with our festival previews, we’ve posted a few musical recommendations below in audio and visual form – all the choices are some of the smaller acts that may not be so well known.

If music isn’t your thing there are plenty of other attractions to keep you busy. From crazy golf, chilled treats in the ambient forest, a freesports park, comedy and cabaret, the tomorrows world area, the W.I Tea tent, heavenly healing areas and free tea for all (subject to picking up some litter) the list is endless. Even though it’s much smaller than Glastonbury, it’s simply not possible to do and see everything on offer in the four days that it runs.

Oh and we haven’t mentioned the now traditional fancy dress on Saturday which brings a stupidly happy vibe to every Bestival. This year the theme is pop stars, rock stars and divas – it’s going to be rather strange watching The Cure play to a field of Freddie Mercury, Lady Gaga, Elvis Presley, David Bowie and Robert Smith lookalikes.

Until you’ve been to Bestival it’s difficult to appreciate the sheer chaotic brilliance of it all. If you’re not going this year, we highly recommend you grab yourself a ticket as soon as they go on sale for next year. You’ll have the time of your life.

OK, we’ll admit this is a bit of a cheat. The Sunday Best Forum Allstars is a DJ ‘crew’ in which the author of Breaking More Waves is a major participant. Formed by a bunch of reprobates from Austin - Texas, Scotland, London, The Isle of Wight and Portsmouth, the Allstars were created on the forum of the Bestival website and opened the festival in 2010 with a joyously shambolic set that possessed no ‘proper’ DJ skills, but plenty of big tunes that got the party started (see below). Our aim for 2011 is simple – to do it all again.

Back in 2009 we named Starsign Trampoline by Lucky Elephant as one of our top ten albums of the year. Now with a new album on its way there’s a chance to see this very special and unique group in the intimacy of the Polka Dot tent on Friday night. Charming, beautifully crafted songs they’re a treat for your ears.

The third of our recommendations, Kitty, Daisy & Lewis like Lucky Elephant are signed to Sunday Best records, the label arm of Rob Da Bank’s musical output. Taking 50’s rock ‘n’ roll, swing, ska, Hawaiian styles and even disco on Messing With My Life this young brother-sister-sister trio keep it in their family with mum and dad on bass and backing guitar. Their sound is so authentic that if you close your eyes you really will believe that you’ve been transported back 60 years.

Whilst essentially a pop act, former Danish ballet dancer Oh Land’s live performances carry a punchy grit and energy that has endeared her to audiences across the globe, receiving rave reviews for her shows. If you haven’t seen her yet here’s your chance.

Sun of a Gun by OhLand

There are 3 bands on the Bestival line up that we would kill to see. The first two are the Saturday and Sunday headliners – The Cure and Bjork, the third is The Unthanks. If you’re a regular reader of this blog you’ll know that the sad miserablism of their gorgeous folk music is some of the most bewitching we’ve ever heard. A complete contrast to the hi-energy vibe of much of the rest of the festival, expect clog dancing, songs about babies dying and the most beautiful Geordie voices you’ll ever hear.


Bestival runs between the 8-11th September and is completely sold out. Stages and day information for the recommended acts are correct at time of publication.

Check back here shortly after the event for a review of all the important bits that make a festival, and the music as well!