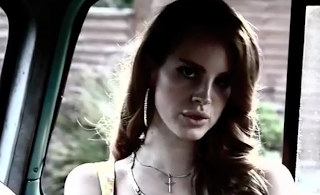 Music blogs are bewildering beast of a collective. Often cited as taste making, sometimes that taste making ability ranges no further than influencing a tiny handful of readers. Anyone who goes to gigs or music festivals with any degree of regularity will know that ‘big on the blogs’ doesn’t necessarily translate to a sizeable audience in person.

However the much blogged Lana Del Rey (we first posted about her in May here) appears to be breaking that rule developing a sizeable audience of if nothing else, curious onlookers, with a recently announced London show selling out in just a few minutes. There’s a growing wave for Del Rey that suggests that almost inevitably she will be touted as one of the ‘next big things’ for the year ahead; a BBC Sound of 2012 listing seems increasingly likely (and on a much smaller scale a Breaking More Waves One To Watch for 2012 place). It's not all down to blogs of course. Like it or not Fearne Cotton of Radio 1 raving about Del Rey gives far more taste making exposure than any blog can.

With forthcoming single Video Games (due October 10) shaping up to be one of our favourite songs of the year, Del Rey has released this video for the other song on the double A-Side. It’s called Blue Jeans. With a hint of Chris Isaak in the instrumentation and Del Rey’s (real name Lizzy Grant) low sultry vocals it’s a fine accompaniment to main course.

There’s already a backlash started amongst music snobs against Del Rey, who don’t like the idea that she's working with a well-known PR company, (the shout of hype can be heard over the hills –even although when we first posted about her there had been no contact from PR companies – our discovery was organic and not through the music industry), is using a top name producer, uses a very stylised ‘Pitchfork love-me’ Super 8-cut-up style for her videos and her father has a dollar or two in his pocket. However whatever package you untie, there’s no denying that under it the music is pretty special.