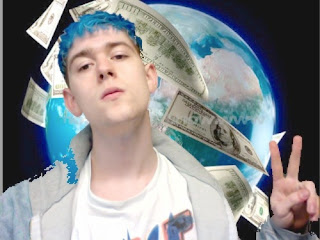 Last month we gave you all the first instalment of the new Unicorn Kid three track freely downloadable single. Now here’s part 2. There are 5 important facts you need to know about part 2.

One. It’s called Boys of Paradise. This is pretty important, for every song should have a title. Otherwise life could become very complicated. Imagine if you were a band like The Cure and had recorded over 300 songs and they were all untitled. Devising a concert set list could be pretty confusing. Actually The Cure do have a song called Untitled, but thankfully it’s only one.

Two. Unicorn Kid now has blue hair. Blue rinses were something that were commonly sported by grannies in the 70’s, but Unicorn Kid’s bringing it back proper old school and with a degree of boldness.

Three. This track is fun and will probably have men and women over the age of 30 who have forgotten how to have fun shaking their heads in despair. In fact Unicorn Kid recently tweeted that “Ppl over 30 don't get me.” We were a little sad at this and tweeted back “We do.” Thankfully, Unicorn Kid being a polite and well brought up young man tweeted back to Breaking More Waves, Rob da Bank, Popjustice and a couple of other music types “Except you guys duhhhhhh.” We find ourselves in fine over 30's company we'll sure you'll agree.

Four. Whilst Boys of Paradise is good, the best is yet to come and will be released next month. We’ve said this before, but important things need saying more than once. In fact so good is part 3 that we played it at our short high energy set to a couple of thousand people in the Big Top at Bestival just over a week ago. You can’t hear it in this clip, but if you fancy a look you can see just a few seconds of that DJ set from the empty tent at the start to close of play half an hour later. We're happy to take bookings for future festivals, weddings, birthdays and funerals of fans of bonkers high energy electronica - just get in touch.

Five. Press the little down arrow on the Soundcloud player to download for free. And watch out for an army of old blue rinse grannies raving outside your house as you play it, thus proving that over thirties get it once and for all.

BOYS OF PARADISE by ✌ Unicorn Kid ✌
Posted by Breaking More Waves Blog at 20:30