Ronika - Only Only (Video & Remix) 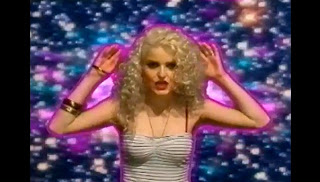 Are we about to have a roller-disco revival? Bestival 2011 featured a roller-disco stage and now Only Only the new single from the funkily perfect Ronika features some hip roller skate action in the video. Mixing up the syncopated electronic bass flavours of early 80’s US club disco with the boombox sounds of B-Boy Streetsound 80’s compilations and a heavy dose of Paul Hardcastle, the smartly executed remix from Fear of Tigers (streaming below) even threatens to topple the original with some aplomb – time to get that Adidas tracksuit and Gazelle trainers out again we think.

Any lady who states on her twitter strapline that “I only eat brains and caviar, SAXOPHONE SOLO,” sounds like the kind of person who would be a LOT OF FUN to hang out with. If she designed a nightclub that was anywhere near the visual aesthetic of her video and style, we’d be there like a shot, busting some moves - we'd even bring a lino mat for some bodypopping.

Only Only is the other part of a double A-sided single, the other song In The City we featured back in August here.

Ronika - Only Only (Fear of Tigers Remix)

Email ThisBlogThis!Share to TwitterShare to FacebookShare to Pinterest
Labels: Ronika