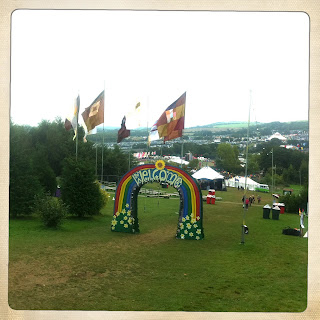 Bestival is the traditional last hurrah of the UK major festival scene's year. It’s also Breaking More Waves absolute favourite and for its eighth year pulled out all the stops to come up with quite possibly its best year ever. Yes Bestival 2011 was an absolute corker. Here’s why.

Set in a wood lined valley and accompanying hills and fields the Bestival site is a creative wonder. From the masses of bunting by the Bollywood tent, the quirky little huts in the Wishing Tree field, the Chinese lanterns that changed colour near the cabaret tent, tree- like sculptural forms with fluorescent tubes for leaves, the swamp shack with its dilapidated shabby chic, the hammocks and lighting in the ambient woods, the abundance of flags everywhere and much more besides, Bestival was a visual treat. Add to this a well thought out site layout that has gradually evolved over the years, with head honcho Rob da Bank and his crew actively listening to punters comments on the Bestival Forum website and the result was not only the best musical line up the event has ever had, but the best site. This was a festival that obviously cared about creating a great atmosphere throughout. There's a shot of part of the festival site at night below.

The last few years have seen Bestival becoming a much ‘younger’ festival in terms of its audience and last year there was criticism in some quarters that it had lost its original spirit. This year, possibly because of headliners such as The Cure and Bjork there was a noticeably older crowd in amongst the high hormone youth. This seemed to create the perfect atmosphere – a mix of wild hedonism combined with a more relaxed calm vibe. Add in a sizeable portion of the audience dressing up on Saturday as a rock star, pop star or diva and the result was not just a colourful site but a vividly colourful audience. Wherever you looked, whatever the age there were big smiling faces with everyone seeming perfectly happy to chat to complete strangers whatever their age.

Before the festival the remnants of hurricane Irene were predicted to wreak havoc, with storm force winds and heavy rain being predicted, yet the weather gods smiled down on the happy punters and the Thursday and Friday turned out to be blissfully sunny and dry, the only harsh winds and rain came on the Saturday and Sunday nights. This was no repeat of ‘Mudstival’ in 2008 though, with plenty of areas of the site remaining free of the stuff even after the rain.

A mix of standard festival portaloos as well as composting toilets and urinals formed out of guttering fixed to boards. For a festival of this capacity (50,000) the toilets were surprisingly good and emptied regularly. There were the inevitable queues at peak times, but these were never horrendous.

Bestival catered for a wide range of food tastes and styles from the standard burger bar to the more exotic Ms Marmitelover’s Underground restaurant. Indian, Chinese, Mexican, French, Spanish, Moroccan were all to be found and there was even locally produced fresh Isle of Wight fodder. Then the absolute highlight, after a walk up a very steep hill, the salvation that was the W.I tent with the cheapest tea, cake and quiches on site all served by smiling adorable apron wearing ladies.

The only criticism of Bestival 2011 is that there was quite simply too much good music. Not only was there too much good music, but the PA systems that the music played through were powerful and clear - something that a number of UK festivals have been unable to achieve this year. From indie to folk to electronica to pop to dubstep to rock ‘n’ roll, all kinds of genres were to be found at Bestival.

The Cure played a fan and festival pleasing marathon two and a half hour 32 song set, which heaped single after single (Love Song, Friday I’m In Love, Boys Don’t Cry, Lovecats, Lullaby, Why Can’t I Be You and more) next to the brooding darkness of the likes of Plainsong, Shake Dog Shake, Disintegration and punk pop classics such as the closing Killing An Arab and 10:15 Saturday Night. The slightly greying black clad wispy haired Robert Smith was clearly enjoying himself and still on the top of his game, sounding as distinctive as he ever has been.

Other older performers also came up trumps with Brian Wilson and his band captivating the crowd mid Friday afternoon – never could the words good vibrations be better used. Likewise the sight of a 20-30,000 fancy dressed-up audience performing the actions of YMCA to an enthusiastic Village People became one of the most bizarre and unexpected highlights of the weekend. Headliner Bjork split the audience with by her own admission a set that wasn’t designed for festivals. Sporting a freakish mix of ginger afro wig, a blue shell shaped headpiece and pencil skirt, her set confused and delighted equally – her voice still powerful and childlike, her new songs sometimes too inaccessible for the majority. Health and safety staff were probably also quaking in their boots with Bjork setting off hand operated fireworks and then later a Chinese lantern released by someone in the audience landed on stage and threatened to turn the whole event into something rather serious. Thankfully staff reacted quickly and a fire extinguisher was set loose.

Of course Bestival isn’t just about the main stage – there were 17 others to enjoy. James Blake’s Big Top set was compelling and full of rich atmosphere, whilst over at the Sailor Jerry stage Alex Winston (streaming below) was found jumping onto the drum riser during her performance of her quirky songs that sounded like alt. pop designed by Kate Bush and Joanna Newsom. Another highlight came from Lucy Roses’s strikingly beautiful acoustic songs on the tiny Bandstand which battled with the bass and beats of Magnetic Man from the main stage and won.

Bestival lived up to its name. Quite simply the best festival we’ve been to this year, and in over 20 years of festival going, possibly ever.

That video at the end was a great way to finish! Taken from somewhere near the W.I. tent?

Yes near there. Slightly to the left and further up the hill as you look down the hill towards the viewing platform that you can't view much from because the trees by it have grown so tall !