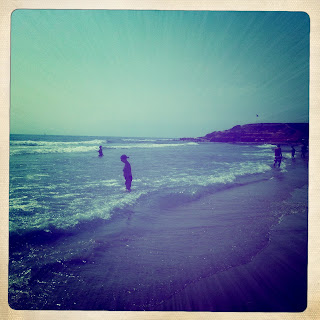 So in a week where Breaking More Waves featured songs that sound a bit like t.A.T.u in the chorus (or possibly Little Boots) , singers that have big commercial potential next year, some minimalistic folk music that was better than peanut butter on toast and ranted at indie-snobs wanking over their laptops, we unfortunately didn’t have time to post about a few other great songs that deserve to be brought to your attention if you haven’t heard them yet. This is where we catch up before a lazy Sunday lay-in, it’s called The Saturday Surf.

Jamie n Commons is no stranger to the blog and we get reaquainted with new song Nina. When we talked about authenticity in music yesterday (as well as indie-snobs less savory habits), Commons is one for people who value this authenticity greatly. Unless of course his deep gravel soaked old man’s tones are exactly that and we’ve all been ‘tricked’ with some imposter pictures of a good looking young gent who purportedly sings these songs. Whatever way, appreciate his Bourbon roughed up sound.

To say we’re way behind with this track would be a massive understatement. Posted on 130 Hype Machine listed blogs, with coming up to half a million plays on its Soundcloud player you could easily ask, what’s the point now? The point is that M83’s new album Hurry Up We’re Dreaming is released in the UK on October 17, they have just announced some new UK dates in January yesterday and this is one of the stand-out tracks from it and somewhere, someone may not have heard it yet, so we’re giving it a shot and if you haven’t listened to it yet be warned, you’re going to spend the rest of the day walking round making a strange tropical bird synth-riff sound. It's good to have M83 back. Brilliant.

Following a track that the whole world and his wife seems to know about, here’s one that has sneaked out pretty much unnoticed at the moment. The subject of one previous blog post on Breaking More Waves back in April, this new Cave Painting song Rio continues where Midnight Love left off, that is to say it’s a brooding monster that sneaks subtly out of the box, creeping like some sort of quiet clawed demon that dances to its own shadowy rhythm, growing with all sorts of inner power on its journey. The band are on tour right now and play a free gig alongside Teeth, Wild Palms and Bear Cavalry on September 29 in Breaking More Waves hometown Portsmouth at The Registry. Watch our twitter for a few thoughts from that gig.

That ladies and gentlemen was what useful detritus we found left over on the beach after the tide went out. A useful Saturday Surf. Enjoy your weekend, see you next week.