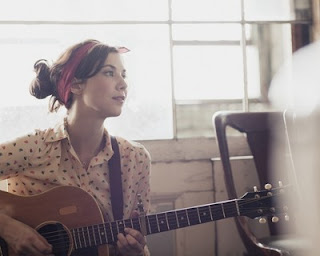 Remember the iconic Kevin Cummins photo for the NME of The Stone Roses covered in paint? (This one.) Well now Irish singer songwriter and previously Mercury nominated singer songwriter Lisa Hannigan has picked up the baton with her video for the song Knots, which comes from Lisa’s second album which is released in the UK on October 10. A tour follows in November in England and Scotland.

“The idea for this video was that the instruments would be played by paint (the drums are metallic spray cans, the strings are blue and green from above, the horns are orange) and would be flung at me in accordance with their part in the song. Up until the end, when everybody threw paint at me by the pint. We shot our one and only take in a front garden in Dublin, and we used three spray cans, four squeezy bottles, five water pistols and four buckets of poster paint — which, incidentally, tastes like wet chalk,” explains Lisa. It certainly looks like a lot of messy childlike fun and we can’t imagine that the voice at the end who jokes “OK take 2,” was particularly popular with Lisa.