Music That Made Me #33 - Peter, Paul and Mary - Puff The Magic Dragon 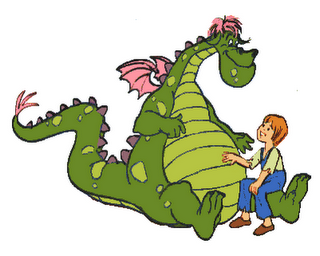 As you may have noticed by now, Music That Made Me is not an erudite list of classic songs, nor is it just a compilation of my favourites from over the years, but records that have in some way influenced my tastes, for better or worse. There are probably certain periods of our lives that our musical preferences are influenced more than others; my teens and my mid-twenties probably stand out as defining periods, although I continue to be excited by discovering of the new even now. Yet one of the most important periods, hardly touched on in this series, is early childhood. I’ve mentioned my first single purchase and early camping holidays in France, but before that much of my earliest exposure to music came from my parent’s record player.

There was something very sturdy about that record player. It was a solid brown box with a hinged lid that was fixed down with two golden coloured clasps. You would place the records on a central spindle from where they would drop onto the deck with a satisfying ‘clomp’ before the arm swung slowly across and rested itself onto the vinyl grooves.

My parent’s singles were kept upright in a wire rack, which ensured that any possible warping of the discs was kept to a minimum. It was a mix of their teenage rock ‘n’ roll favourites, from The Everly Brothers to Eddie Cochran but interspersed with some children’s records that they’d purchased for me – recordings of Teddy Bears Picnic, (How Much Is) That Doggie In The Window and this, the bizarre Puff The Magic Dragon by Peter, Paul and Mary.

Although the writers of the song denied its references, the allusion to ‘puffing’ a joint, chasing the ‘dragon’ and ‘Little Jackie Paper’ - a possible relation to rolling a spliff, caused an outrage amongst the moral masses when it was first released in the 1960’s and was adopted by the flower-power hippy scene at the time . Yet to this young listener, sitting at home in his parents lounge with its patterned brown wallpaper and white fake leather sofas – the epitome of cool in the early 70’s – this song was a sweet, magical and innocent song.

Email ThisBlogThis!Share to TwitterShare to FacebookShare to Pinterest
Labels: Music That Made Me, Peter Paul and Mary

yes! what a song haha. I loved these lyrics as a kid, cheers for posting it, seasoned my afternoon with some sweet nostalgia.

Funny enough I have much the same memories - I always wondered what "ceiling wax" was, until years later I realised it must have been "sealing wax". I feel pedantically obliged to point out that you do have a rogue apostrophe on "it's" though :p

Thanks - the naughty little ' has now been deleted.