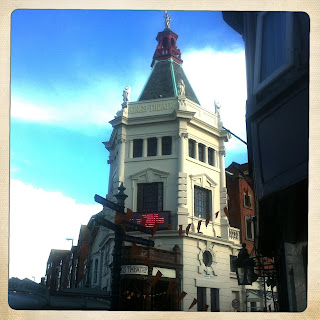 In the last of our end of term school-report style festival reviews, we turn our attention to Southsea Fest 2011. A truly independent urban budget festival set on one street in Southsea, Portsmouth, home town of Breaking More Waves. This was the fifth year of the festival with pubs, clubs and an Edwardian theatre hosting 15 stages of musical mayhem that represented Southsea Fest’s biggest, best and most diverse line-up to date.

There was a very old fashioned charm about Southsea Fest that matched the antique and independent shops of its Albert Road location. At times this old-school vibe meant that things were a little chaotic with a number of stages running behind time due to the ambitious number of bands on the line up and relatively short scheduled change-over times, but because there was always something else to absorb yourself in just a minute away, it didn’t matter. Being able to quickly pop in to another venue to catch something you hadn’t planned on whilst waiting for the next scheduled band just added to the enjoyment. There was also something pleasing about the lack of obvious corporate sponsorship and sense that this wasn’t a ‘music industry’ run event or one designed to make huge profits, but one run by people passionate about providing an affordable festival that provides a platform to support local and new emerging national talent.

Here’s the run down on the key points.

Early Birds £10 Advance £16 On The Door £20 – Quite simply the best value festival we’ve attended this year.

Set along the length of Albert Road, Southsea. Venues included the balconied and seated Kings Theatre (pictured above) – an oasis of elegance in the dark, The Wedgewood Rooms and it’s smaller sister venue The Edge of the Wedge, plus a variety of café’s, pubs and social clubs. The urban location for Southsea Fest meant that even when it started to rain in the late afternoon / early evening wellies were not required, in fact even an umbrella or mac were not essential – so close were all the venues to each other that you could skip between venues and avoid a soaking.

The bane of multi-venue festivals. If you’ve ever been to the likes of the Great Escape or Camden Crawl you’ll fully appreciate the potential problems of putting a popular band in a small venue with several hundred people trying to get in to see them. Thankfully we didn’t experience any queuing / capacity issues at Southsea Fest. Venues were busy and at some points nearing capacity but it was possible to get in to see everything we wanted to see without standing outside feeling disappointed.

Not a portaloo or composting toilet in sight. Armitage Shanks was highly visible though.

Pleasantly sunny and breezy, with a small rain shower early evening, but really this is the one festival where weather really doesn’t matter.

A complete mix of ages and types. There was a noticeably older crowd in the Kings Theatre which hosted music that was largely, but not exclusively of a more folkish / acoustic bent. Likewise certain venues that had heavier rock bands playing had a more bearded masculine musk to them. Whilst inevitably there was a large local crowd, this year Southsea Fest reported that their advance ticket sales included significant numbers from outside the city, demonstrating how with a stronger line-up year on year Southsea Fest is becoming a nationally recognised event.

They say the early bird catches the worm and at Southsea Fest early arrivals at The Globe pub were treated to captivating sets by two excellent singer songwriters. Antonio Lulic’s rootsy tones (streaming below) hinted at the likes of two Bruce’s, namely Springsteen and Hornsby as well as more contemporary bands such as Admiral Fallow, Dan Mangan and Mumford & Sons. Even more impressive was Kal Lavelle whose set of heart-on-sleeve songs about relationship break-downs (Disaster), pretty pop tunes (Breakfast at Tiffany’s) and wide-throated covers (Crazy by Gnarls Barkley segueing into I Need a Dollar) were rich with melody and emotion.

Late comers could still find much to be rewarded with though. Kill It Kid brought the Kings Theatre (pictured above) out of its slumber with a barrage of pummelling rock riffage, dirty blues vocals and gut-punching songs that seemed at brilliant odds with much of the quieter folk influenced acts on that stage and Kyla La Grange (streaming below), whilst appearing somewhat overwhelmed by the scale of the space blew cobwebs from the ceiling with her sultry, husky tones and grandiose rock tunes. It wasn’t all about guitars though. Curxes drew a big crowd in a small pub (Little Johnny Russell’s) and sped their way through a set that flourished with austere industrial synths (albeit accompanied by menacing guitar effects) and lead singer Roberta’s magnificently weighty Zola Jesus / Siouxsie Sioux vocal. Despite battling technical problems which meant that Roberta couldn’t hear herself singing at all, Curxes won over a Portsmouth audience that are not known for their love of electronic music.

Little Johnny Russell’s proved a difficult gig for a number of acts during the day, Adam Barnes reportedly struggled against the chattering masses and the venues half-arsed sound system and half-interested audience weighed against the pouting girl-punk-pop of Pris – the best dressed band of the day. Lead singer Kat exuded sassy style in a riot of tartan, pink hair and sunglasses and looked every inch the pop star in the making. With a cover of The Clash’s Janie Jones and the best use of the word ‘C*nt’ in a pop song since The Libertines What A Waster during Blu-Tack Baby, Pris revived the idea that getting up on stage and doing it with some personality and attitude is far more important than big voiced X-Factor falsity.

Our highlight of the day however was left till near the end. Clock Opera’s needles and pins electronica proved comparable to nothing else. Each of their songs was a slow building, bubbling hot volcano that finally exploded in powerful waves of reach for the stars vocals, rhythms, electronic loops and formidable power, their bearded front man Guy Connelly’s whole body twitching with the beautiful intensity of the music. Emotional exhaustion and happiness derived from a half hour set of music – surely that’s what the best live experiences are about? Clock Opera dispatched it in bucket loads.

The Sound of the Girl Next Door, Singing by Antonio Lulić
Posted by Breaking More Waves Blog at 17:01