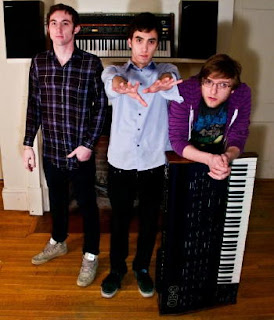 A tip for any potential new band out there; before you decide on a name make sure you Google it. Boston keyboard party dudes Giantess, one of Breaking More Waves Ones To Watch in 2009 could have well been advised to do that. It’s a bad pun we know but the number of entries relating to Giantess on the internet is huge. Even searching on ‘Giantess band’ can be confusing, with more than one band taking this name. In our wired up world it’s important for fans to be able to easily access a bands Myspace page, and it hasn’t been that easy to find Breaking More Waves current favourite funked up synth wizards.

It seems the band may have also realised this as they are about to rename themselves Yes Giantess. Now let’s get this straight, these guys may not have cropped up on many peoples radar yet, but since we named them in our Ones To Watch the influential Popjustice site picked up on them, and our favourite label of the year (hell to the fact that it’s only March) Neon Gold are due to be releasing their debut single soon. How good are Neon Gold? Well they put out Passion Pit as their debut release and Marina and the Diamonds as their second. These guys know their stuff.

Yes Giantess also have slots coming up at SXSW, and although not yet officially confirmed by the organisers on their website, the bands singer Jan Rosenfeld has told Breaking More Waves that they will be at The Great Escape in Brighton for their UK debut. See you down the front for that one.

For the moment however Yes Giantess remain resolutely underground, which is we understand partly by choice. When we talk of the underground it provides stereotypical images of a sound that is non populist, dark and left of centre. There is plenty of underground music in the rock genre, but pop music is not something you would associate with the term. Pop is by definition popular, colourful and usually mainstream. However what Yes Giantess do is underground by a slightly different definition. This is a band that can be termed underground as they play hip Boston dance parties, have only played a handful of gigs, are yet to come to mainstream recognition and have not yet released any material except via Myspace. What material it is though.

Yes Giantess crank up their keyboards to create instantly catchy happy melodies with big funky hooks designed to get in your pants and shake you until you groove. This is a band who are like Justin Timberlake with an 80’s record collection and a big hard on, and they have come to chat up your girlfriend. Boys you have been warned. To give you a flavour they have been compared with New Kids On The Block, MGMT and Chromeo but it’s all done with a slightly geek chic Boston dance party attitude. We’ve been lucky enough to hear some of their unreleased demos such as the ear grinding Demons which takes a big heavy industrial robotic beat and slashes thrusting warped sex synth across it. Then of course there is Tuff N Stuff and You Were Young, both currently on the bands Myspace. These tunes are guaranteed to make you woop and swing those hips with camp abandon.