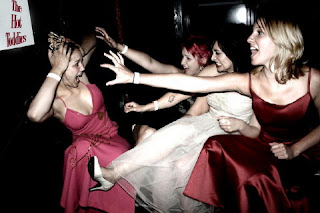 The Hot Toddies are still relatively new to Breaking More Waves, although they have actually been around for some time. Initially formed back in 2004 on a beach in Mexico, the band are a four piece from Oakland, California who play effervescent, bubblegum garage surf pop with sixties girl group reference points and a DIY aesthetic. Think of the Go Go’s and The 5,6,7,8’s and you’ll be somewhere near the mark. Consisting of Erin, Heidi, Sylvia and Jessica the group have so far released one album, Smell The Mitten and another is promised later this year. Their sound is that of the best college summers and hanging out with friends at the coolest parties.

The toddy girls have recently confirmed a tour of the UK including dates in London, Liverpool, Brighton and just round the corner from Breaking More Waves HQ in Portsmouth. Breaking More Waves recommends that if you live in Blighty you try to catch one of these shows where you will be able to hear their retro all girl harmonies and funny quirky lyrics. “Photosynthesis is my favourite chemical reaction, when the plants are growing it gives me so much satisfaction,” they sing on Photosynthesis. Their biology teachers must be proud. Then there is the internet romancing do wop balladry of HTML “You touched my modem, we went to the bop, my heart gigaflopped, when I saw your...W W W, whoa-oa-oa, dot com.”

The Hot Toddies; Very much a musical pick you up with a sense of fun. Watch out for an exclusive interview with the band here soon ! Here's a video to a track that is just over 50 seconds long, entitled Suck My Balls. Warning : Contains extreme language that will make you laugh nervously !

Email ThisBlogThis!Share to TwitterShare to FacebookShare to Pinterest
Labels: The Hot Toddies