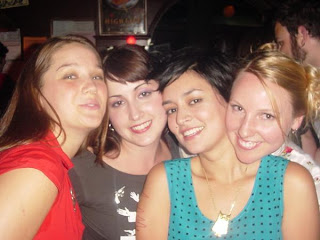 Just a week or so ago we brought you the finest band from San Francisco Bay area, The Hot Toddies. Now before they head on over to the UK for a tour in April, it’s time to sit down with a virtual internet beer and ask the group a few questions.

First of all can you tell us a little bit about The Hot Toddies, where do you come from, who you are, what inspires you and the type of music you play ?

It’s been a round for a while now. But can tell us a little bit about the album Smell The Mitten ?

Smell the Mitten was recorded in the summer of 2007 with our good friend and sound engineer, Johnny Genius. It was our first full-length album and the songs on it were written over a period of about 2 years around many campfires and backyard parties. We did most of the album, besides drum tracks, in Johnny’s apartment and drank a lot of whiskey and wine while recording. The vocals were recorded in a closet that was converted to a recording booth.

Have you plans for a release this year, and if so what can you tell us about it ?

We have about 6 new songs ready to record and will be heading into the studio with another great engineer friend, Michael Fajen, in April when we get back from the UK. So far the songs are really different from each other – we’ve got a few rocking fast ones, an acoustic ukulele song, a song in French, and a jazzy little song about cooking and sex. We get a lot of song writing inspiration from travelling so we’re hoping to write a few new ones for the next album while on tour in the UK!

Your music is very much based in 60’s pop and doo wop. What bands from this era do you like yourselves and can you recommend any great tunes from that era to readers of Breaking More Waves ?

We do like a lot of 60’s era artists, although not just limited to pop or doo-wop. The Beatles and The Beach Boys are pretty classic influences of course. We also love the soul stuff – Otis Redding, James Brown, and Irma Thomas. The ladies in The Shangri-Las, The Crystals, and The Ronettes, had some great songs as well during that time. But honestly, we never set out to write anything that sounds retro or “60’s” at all. Apparently it just comes out that way. We do love the layered harmonies of that era and there’s also a lot of contemporary bands we admire that use them too like Mates of State, the Ditty Bops and Fleet Foxes.

At Breaking More Waves we have come to the conclusion that there simply cannot be truly original music anymore as there are only so many notes and so many noises...everything is going to sound like something that has gone before. What do you think of this statement ?

We would probably agree with that statement. And add that we think it's great that there are musicians out there trying to revolutionize music and create something amazingly new and unique... but that's never been our shteeze. The Toddies like to keep it real and simple in order to have as much fun as we possibly can. And when we're suddenly hit with a major musical epiphany, we'll just go with it.

Our party soundtrack would definitely be selected for danceability and sing-along potential: The Beatles, James Brown, the Decemberists, Journey, Queen, and the Pogues would be some of the artists on that list.

You’re coming the UK for a tour with Foxes! How did that come about ?

Basically we met Foxes! through Myspace while talking about setting up a show in Brighton, and discovered that they wanted to do a tour around the same time. We really liked their sound so we decided to combine forces! We’re very excited to see them live and make some new friends.

What is the ideal night out for The Hot Toddies ?

Sushi dinner with plenty of beer and sake, followed by rollerskating, a beach bonfire and then sneaking into a nearby hot tub.

Breaking More Waves is getting the drinks in, what are you all having ?

Let’s see… if we’re at the bar in England, we’ll take some shots of nice Irish whiskey, 4 snakebites, Absinthe, Stella and 4 shots of Fernet. For more chill evenings, just 4 bottles of wine will do.

Ok no problem, we'll join you in that except for the Absinthe... it doesn't agree with us. And finally, just how hot are the Hot Toddies ?

Well, just to set the record straight, we did name ourselves after a drink – not trying to claim anything on the hotness front – but we think that’s for you to decide.

So this April, if you are in the UK, get out and see The Hot Toddies and discover if they are hot or not. We’ll be reporting back from their Portsmouth gig which is being promoted by our good friends the The Hong Kong Gardeners. If you are in the Portsmouth area you can get tickets here. We’ll let you know what we think !
Posted by Breaking More Waves Blog at 00:01

Email ThisBlogThis!Share to TwitterShare to FacebookShare to Pinterest
Labels: The Hot Toddies