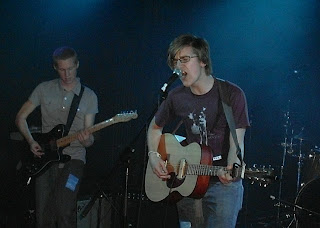 “Good music by people who care,” is the strap line for Jellymaid Music; a record label based in Portsmouth, Uk. Jellymaid specialise in supporting local artists, so it is therefore fitting that the labels first ever showcase is held in the most established music venue in their home town.

The B Of The Bang are known for their experimentation, often bringing sombre lo-fi folk and electronica to the stage. For this showcase however the group play to the Wedgewood Rooms strengths, discarding much of their acoustic sound. “I’ve broken my banjo,” announces lead singer Chris Whitear, eliciting “Ahhh’s” from the crowd before the band launch into the metallic commotion of Little Bean. It’s straightforward rock, but characterised by a very English baritone vocal and the bands need to be just a little bit different. The stage front has pieces of the bands artwork on display, there are three drummers forcing the beat along and during Lung, their most anthemic number, detuned guitars can be heard working hard to ensure that the sound never veers too far into the mainstream. There are hints from this performance that the band have the potential to find a place higher than bottom of the bill, from the singers confident but slightly awkward Bono/ Chris Martin moment of leaving the stage to embrace the crowd, to the almost sanguine sounding Delores. Whether such mainstream propriety would sit permanently comfortable with the bands ethos is questionable however.

The Autons bring ties, interesting hair and shouty indie electro punk pop of the variety that can be found in many toilet venues around Camden on a rainy Tuesday night. Be careful with the world electro though. This does not imply that Autons are part of the new rave gang, or even the Brooklyn cool kids. Their form of indie electro consists of dark buzzing guitars and hyperactive keyboard moments that blend together like The Buzzcocks and Carter USM playing British Bulldog in the playground. Nearly every snarling song rushes headlong into a frenetic sweaty refrain designed for the moshpit, although tonight with such a range of guitar based bands on display The Autons sound seems a little misplaced.

The Melodramas arrive with a bucket load of “Woah woah woah’s,” energy, floppy fringes and tambourine bashing skinny jean indie pop with their song The Day You Die. A few years ago we would have given this band a begrudging thumbs up, but right now their sound seems dated and unadventurous. It’s landfill mortgage indie, empty of any real substance or meaning. “We used to be a metal band called Slayer, but those days are behind us,” they announce. Frankly we would prefer to listen to Slayer. If you believe that great art and music is created by progressive development and the attempt to create something new and inspiring then The Melodramas will not appeal to you. If you simply want some 'nice jaunty tunes with guitars' and not an ounce of challenge then The Melodramas will be your cup of tea. Breaking More Waves seem to be in the minority with our opinion of this band though, who are clearly having fun as do most of the audience.

Frank Turners favourite new band are The Dawn Chorus , and it is easy to see why. The band may not have the coolest of looks, fashion or haircuts, but are slowly building an audience that has lead to a UK tour in April and festival slots confirmed at both Bestival and 2000 Trees later this year. The Dawn Chorus are rooted in acoustic sounds, but with songs like A Blast From The Present they add high noon trumpet fanfares and chanted harmonies to produce something that is joyously uplifting and honestly life affirming. It's ambitious, absorbing and well crafted without ever being immediately obvious. The Dawn Chorus carry commodities of good old fashioned quality playing and songs that pack a punch through careful structuring and arrangement. Their songs range from alt. country pop to bigger indie rockier numbers, but without exception every song the band plays fills the Wedgewood Rooms with a sound far removed from that of an English south coast city.

Email ThisBlogThis!Share to TwitterShare to FacebookShare to Pinterest
Labels: The Autons, The B Of The Bang, The Dawn Chorus, The Melodramas

Melodramas have been invited to play KuwaitStock on 2nd October and onemovement music festival in Perth, Australia (Main Stage) on 17th October. Thanks for your help so far. xx