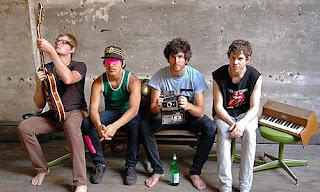 Last month we reported from a gig at Brighton Audio where Portland boys Hockey thrust a varied mix of indie dance sounds into our faces that captured the essence of LCD Soundsystem, The Rolling Stones and The Rapture in a frenzied half hour set. We were almost impressed, but the band let themselves down with some unforgivable second rate white funk moments that made even the most excruciating slap bass moves from Mark King of Level 42 seem acceptable. Maybe this is why their original label Columbia dropped them before they had even released anything. However another major, Virgin have picked them up and Hockey now release their debut single Too Fake in the UK on March 16th. Having been out on the road with Passion Pit, the band will be supporting Friendly Fires in April and May before hitting a variety of summer festivals and own headlining dates.

Too Fake is a brash, confident squib of a song with a gyrating bass line and a chorus designed to slay doubters. It has a rasping vocal smothered in fuzzed up distortion that has bolted from the same stable as The Strokes. Except at this riding school they’ve been serving the funk pills. “Watch out I’ve got too much soul for the world,” yells lead singer Ben. Let’s hope he remembers that over excess is not particularly a good thing.

Email ThisBlogThis!Share to TwitterShare to FacebookShare to Pinterest
Labels: Hockey

and they're playing the Cellars!