The B Of The Bang - Welcome To The Beautiful South 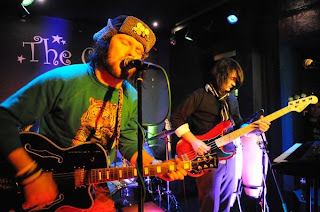 The B Of The Bang from Portsmouth are just about to set out on a nationwide tour with The Dawn Chorus in support of their single Alfred, Light The Fires. The band will soon be parading their music, a mixture of folk, rock and doom laden electronics through some of the toilet venues of the UK. Their sound has been described as dark and elegiac, so it comes as quite a surprise to find that lead singer Christopher Whitear, whilst having a certain and stable vision of how his music should be, also has a subtle and sometimes self depriciating sense of humour.

This article is called ‘Welcome To The Beautiful South’. You are based in Portsmouth. What do you think, as musicians, are the benefits of being located where you come from ? And what are the bad things ?

Errr.....hmmm......good things.......errr.....the sea? Just joshing - I think Southsea especially has a great music community at the moment. There are some really strong bands around (The Dawn Chorus, Hold Fast, Loz Bridge & The Box Social, Andy Foster and others) and some great venues who really get behind live music (The Cellars, Little Johnny Russell’s etc...). Stuff like Southsea Fest last year showed that, when people set their mind to it, great things can happen. I love the whole 'independent republic of Albert Road' spirit...it's reminiscent of the North Laines in Brighton. Only with less silly haircuts.

On the downside - Portsmouth is not really known for its cutting-edge, forward-thinking, embrace-culture attitude is it? But I do think that’s slowly changing. There's only 143 lad-rock, libertine rip-offs this year so that’s down 82% from last year...

Yes we agree that there have been a huge number of sub standard lad rock bands in Portsmouth. Where are the girls forming bands ? When there is a girl in a band it seems she is always the vocalist backed by males. And yes, whilst The Libertines at their peak were fantastic, there are too many imitators who make even the Pigeon Detectives look good. Anyway, moving on, you’ve just teamed up with Jellymaid Music. Tell us about them.

It’s run by Rich Tamblyn who owns The Old Blacksmiths Studios in Portsmouth. Basically, The Dawn Chorus released their album on it last year and it got some great reviews (including a not-to-be-sneezed-at number 7 in John Earls revered Planet Sound list of 2008.). Neil from the band asked if he could record some of our stuff and it worked really well so - like magic, we find ourselves fighting for a common cause. Not sure what that cause is yet mind....we'll be going on tour with them in April so we'll see....

You have a single out this week called Alfred, Light The Fires. Explain and discuss this song please.

It’s from a dream I had. Basically, it was this gothic animation type affair that had a little lad in a flat cap being mischievous in the 1930's. At the end of the dream he burns down an old peoples home, inside which is an 80 year old version of himself. What does it all mean Breaking More Waves???

It means you need to stay off the cider I think. Some of the sounds you make seem to come from a pretty dark place. Why ?

I can't afford light bulbs (chortle chortle). I don't know....it just seems more.....appealing I guess. Its not a conscious decision. I just like minor chords.....there are couple of songs on the album that might surprise you though. They're almost....jaunty. (shudders)

You are building quite a reputation for your live sets where you sometimes go fully unplugged. Is that something you enjoy doing ? And where did the idea come from.

It came out of necessity really. The B Of The Bang is a collective, sometimes there are 6 of us, sometimes it's just me. We played a gig where everything was going wrong, power failures, equipment breaking. I just thought it might be nice to try it. I'd much rather be one of those bands that some nights are utterly fantastic and some nights are utterly shite. You have to try things to keep it interesting for yourself and the audience. Sometimes they work and sometimes not. Again, it's not really a deliberate attempt to be different. I just get bored easily. Those bands you go and see and it just sounds like they've put the record on, I sort of think "what's the point?"

Do you have plans for any further unusual happenings at future live shows ?

You mean like jugglers and dancing girls? Perhaps we could have some dadaism in there? A bit of confrontational situationist type stuff? We'll have to see - hopefully.....

Maybe you could get this man here to DJ before you come on ! I believe you shared a stage with him once ! You also have a reputation for liking your sound to be a little imperfect. De tuned guitars etc. Are you worried that this may put people off your music ?

It’s a weird one this. I speak to a lot of people who just don't seem to understand the concept of imperfectionism. I don't get the point of ironing out every little trace of what makes something human on a record. Obviously you want things to sound as good as they can but a little lo-fi never hurt anyone! The albums I love are ones you have to invest a little time and effort in, you can't really hear the words on Loveless but it's part of its charm. Beauty buried under noise. It's a recurring theme for me I suppose. If you were recording Leadbelly today would you use auto-tune on his guitar? I'm all for using technology but it should support and emphasise what you're trying to say, not squeeze the soul out of it. There's a bit of computer software that can tell you whether your song is likely to be a hit single, which is why a lot of stuff on the radio has that same chord progression, the same bit that changes key etc....fuck off Nickelback.

We hear there is an album on the way. We’re very excited about this, what can you tell us about it ?

I can tell you it's called Beginning. Middle. End. It has 11 songs on it and a few incidental bits of music that link some of the songs. I want it to be like watching a film or reading a book, hence the title.

The video for your song Lung had a great concept. How did that come about ?

It's great because it had very little to do with me! Some friends of ours have a small film company called Pinter Moments. We get on really well and have a lot of similar views on music and film. One of them, Cal, sometimes plays guitar with us and he had this idea for the 'pass-it-on' motif. We did a bit in real life too....leaving CDs and tapes around for people to listen to and give away. They're probably still there....

The single Alfred, Light The Fires is out this week, you can buy it here. Catch The B Of The Bang on the road with The Dawn Chorus in the UK at a venue near you soon, check the Myspace for details. Here is the video from one of the bands own self releases, Lung released prior to signing to Jellymaid.