Perceptions Of Success In The Music Industry 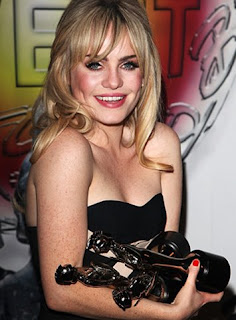 With Duffy being proclaimed a success at the 2009 Brit Awards, Breaking More Waves asks how we measure such success.

If there is one thing that the on line revolution of the noughties has changed in relation to music, it may well be the accuracy of public determination of what is successful. In the past for the majority of the public, success has been related to commercial sales.

However, with the IFPI estimating that more than 40 billion songs were downloaded illegally in 2008 - that’s 95% of total music downloads, it is becoming increasingly difficult to judge who is really popular. This year one of Breaking More Waves favourite new pop stars Victoria Hesketh aka Little Boots gave away her single Stuck On Repeat free as an I Tunes single of the week. It was the most downloaded I Tunes free single of all time. But it will not feature in the UK Top 40 Charts as nobody paid for it. So does that make Little Boots successful ? She certainly won’t have made any money from those downloads. Hesketh has said that she views this as a success. As an artist she wants people to hear her music, the free I Tunes single has enabled that to happen. She has gone on to say that she believes that where there is good music people will find a way to make money from it, but maybe not in traditional form of CD sales.

What Hesketh is alluding to is the now widely used term synchronisation. These days artists can earn significant revenue from getting their music on computer games, television adverts, ringtones and the like. An artist could make large amounts of money, have their music heard all over the world and yet only sell a small handful of singles or albums. So is high potential earnings through synchronisation ‘success’ ? And if so how can it be measured for the public to gauge who is successful ?

Breaking More Waves believes that from an artist perspective success should not just be viewed in terms of sales. As Einstein once said “Try not to become a man of success but rather try to become a man of value." We believe success is about completing what the artist intended with integrity. For one artist this can mean making money, but for another like Little Boots it may mean being in a position that the public get to hear your music irrespective of if you make or lose money, for another it may be putting on their own live show to just a handful of friends. Simply finishing what the artist planned to do can be viewed artistic success. Unfortunately many artists don’t actually have a plan or any particular goals when they start out, and so are never able to appreciate success. Without an appreciation of success it is easy to lose inspiration and momentum irrespective of initial motivation.

Success for the artist is judged by the artists own criteria, but this may not match with public perception. Old perceptions of success for the public were usually benchmarked against if an artist was riding high in the singles and album charts and if they were appearing on programs such as Top Of The Pops. From this information the public knew that the artist was popular and probably earning significant amounts of money from sales of their albums. It was a simple and effective model to measure pop success.

To measure commercial success now however there are a huge number of factors. Synchronisation earnings, ticket sales, indie label profitability against major label profitability (on a major an artist may only see 5% of whatever profits their CD’s sale, on their own indie they would reap a much larger share), legal downloads, merchandise, product endorsements and many more factors means that the music industry and the public have no single and reliable means of measuring commercial success.

There are lots of different models of success. and artistic success and commercial success may not always be the same thing. In this digital age, personal artistic success can still be easily defined by the artist themselves and with the cheap availability of technology artistic goals can often be more easily accomplished than the past. Commercial success is however a much more complex being for both the music industry and the public to grapple with. Perhaps it is for this reason that there are now so many awards shows such as the Brits, Mercury, Mobo awards etc as the industry attempts to clarify the artists it deems are succesful.
Posted by Breaking More Waves Blog at 00:01