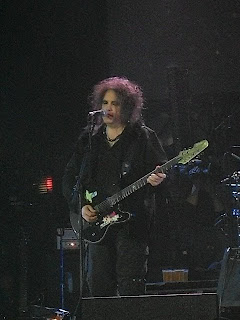 In a recent post we wrote of how the NME of today is a changed beast from that of yesteryear, run by an editor who talks of growing the brand. The fact is that commercial reality is something that the NME has to contend with. Sales of the publication continue to decline, now down to less than 50,000 a week, and like Top of the Pops there could soon be the day where there is no NME on the newsagents shelves. The brand however goes from strength to strength. People may not be reading the NME, but they like the gigs they put on. Tonight the 20,000 capacity London 02 Arena plays host to the NME Big Gig and it’s sold out.

White Lies open proceedings shortly after the doors open. We have been harsh in our opinions of the band in recent weeks, criticising their album for lacking any soul and and a recent live excursion as being “an exercise in one track darkness.” Tonight however White Lies tick nearly all the required boxes. Their heavy bass lines and brooding guitars are designed to fill a big space like this. They sound soaring and potently dramatic. Acknowledging that they feel honoured to be playing with The Cure they thump their chests in admiration, and win over large sections of the audience.

Crystal Castles come across as style over substance. Lead singer Alice is a skeletal shrieking doll who wrestles with a strobe light and bangs the microphone hard against her head before writhing around at the front of the stage in front of the press pit. Electro punks they may be but already their act is beginning to fall into the realms of a parody of itself. The actions of Alice are becoming predictable, less dangerous and anarchic than she probably thinks they are. And the music ? A bleeping mass of Casio / Atari rave which feels lost in such a cavernous space.

Main support act Franz Ferdinand deliver exactly what you would expect. Keeping chat to the minimum the band race through a set of hits such as Matinee, Ulysses and Take Me Out interspersed with songs from their new album. It is a workmanlike performance with Alex Kapranos strutting the stage like a haughty hip schoolmaster. Their tight choppy indie guitar rhythms are zestful and reasonably crowd pleasing, even connecting with some of the die hard Cure fans dressed as Robert Smith down the front.

"We're going to play a few songs that we didn't play last year. Quite a few,” mumbles and stutters Smith, referencing their previous epic three and a half hour show in London, and so they do.

The Cure have always been a band that have set their own agenda and tonight for the most part that agenda does not mean pandering to a crowd. For those expecting a greatest hits show there may have been initial disappointment. There can be very few bands who can fill a 20,000 capacity arena and decide to not play so many singles such as Love Cats, Friday I’m In Love, Close To Me, Lullaby or Why Can’t I Be You. Instead The Cure prove that the title of Goth Like Genius may have made as much sense as the recently bestowed NME God Like Genius award as the band wade through a surging set of grand morbid heaviness including Shake Dog Shake, One Hundred Years and the deep despair of Disintegration. It is this refusal to compromise or do the expected that is one of the reasons The Cure still exist today. Only In Between Days and Just Like Heaven are tossed out as crowd pleasers, played one after the other mid set, and they feel almost throwaway.

Smith himself is still the bumbling, awkward slightly alienated boy with the unkempt spider web hair and whiney vocals coaxing sombre introspection from his guitar like an unloved teenager. It is this look and the gothic sadness of the music that has lead to the singular devotion of The Cure for so many. Robert Smith is the anti rock star who just happens to be playing arenas.

Finishing with It’s Over the band return for a five song encore that tosses away the morose and delivers punkish new wave bravado. Boys Don't Cry, Jumping Someone Else's Train, Grinding Halt, 10:15 Saturday Night and Killing An Arab, all songs from the bands earliest releases, are bashed out without any fine tuning. It’s just four men with guitars and drums, like a band in a garage; it feels utterly fresh even though these songs come from three decades ago.

The Cure demonstrate at the NME Big Gig that following your own muse can be as gratifying for an audience as a predictable greatest hits set. This set may not have been the most accessible for those who are new to their music, but for those prepared to accept the challenge The Cure bring bigger, darker rewards.
Posted by Breaking More Waves Blog at 00:01

sounded like a great gig - cure were a band I never quite got to see when I was younger, had a bunch of their albums on vinyl - but at least have kiss me... on my ipod

It was the 6th time I've seen The Cure and each of their shows has been significantly different whilst remaining resolutely The Cure. Kiss Me Kiss Me is up there as one of BMW favourites as well, although the all time favourite is the deliciously dark Disintergration ...harder to get into, but once immersed in it you may never come up again. At some point there may be a blog on BMW ten greatest bands, and The Cure would certainly be in the Top 5.

Thanks for another interesting and entertaining blog Robin. The night of this gig we were driving home from Marina and the Diamonds listening to The Cure covers CD from the NME. The covers are a hit and miss affair, but did remind me how much I love The Cure. Definitely Top 5 for me too, Abbie

To be honest, I found the Cure set a bit boring - compared to, say, the Bloodflowers tour, their goth material lack energy. That being said, the encore was amazing.
Also, I totally agree with Crystal Castle...

Yes Abbie I agree the covers CD is hit and miss, but I think its worth paying the money just for the Futureheads version of Lovecats, which to my mind is a brilliant reworking of a classic song. It's also worth having to listen to Robert Smiths take on covers at the beginning. I was really dissapointed with the Editors number, I thought they could do a Cure song justice, but unfortuantely in my opinion they balls it up big time.

Jooles from what you say, I wish I had seen the Bloodflowers tour then !

Crystal Castles were terrible. Can't believe they get paid for doing such crap.

The Cure encore was amazing, as were some of the songs from the new album.

Didn't see White Lies but a friend of mine said they were pretty good.

Franz were OK, but just OK.