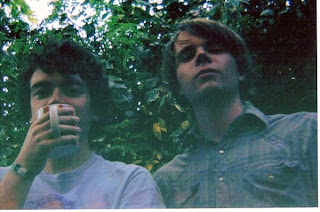 Yes folks, it’s more new folk. Planet Earth sound like a lo-fi version of Noah And The Whale. This is not surprising when you consider that Charlie Fink added drums to this song and helped record some of the bands earliest demos. It goes even further, with Planet Earth having been out on tour with the Noah boys and girl in the autumn of 2008. And if there are musical and vocal similarities, then Planet Earth seem to have decided why stop with just that and instead go the whole hog with similar lyrics as well. On Bergman Movies they sing “ In ten years we’ll be having babies, in twenty we’ll be getting divorced, but five years ago we were in love for the first time.” Five Years Time similarities anyone ? Just a little perhaps.

This single is a sweet unpolished tune, with a world weary ‘my cats just drowned’ monotone vocal and slightly scrappy but jaunty acoustic guitar. It sounds like Planet Earth have had the soundtrack to Juno non stop on their stereo for the last six months and before that it was If You’re Feeling Sinister by Belle and Sebastian.

In April the band are out on a UK tour supporting The Wave Pictures before they wind it all up with appearances at The Great Escape and Stag & Dagger Festivals in May.