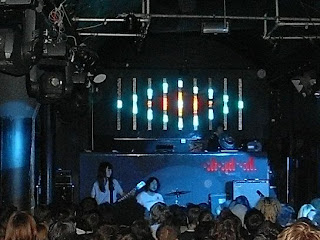 Brighton Digital may not be the ideal venue to witness the Japanese post rock of Mono, a band whose musical scope has seen them enlisting a large chamber orchestra to work with them on their new album Hymn To The Immortal Wind. A black arched sea fronting nightclub, live music is very much an afterthought of Digital, the design layout being primarily focussed on suiting the needs of raving clubbers. In addition Mono themselves do not go out to be a visual band. With the exception of bass player Tamaki the group choose not to stand for most of the show, leaving the majority of the audience staring at what appears to be an almost empty stage and a bank of dazzling lights that blaze into the retina.

If this all sounds rather under whelming, then the music of Mono is certainly not. Mono deliver an instrumental soundtrack of ferocious guitar noise that rises and falls in chiming sonic crescendos, often displaying structures more associated with classical music. Every track they play evolves to find new dreamlike ambient textures and layers. There are moments of monumental beauty as well as hypnotic ear crushing darkness. Song titles seem irrelevant. This is a show that feels like one piece, structured into a series of sonic chapters.

Despite the walls of sound that Mono produce, the band also bring to Brighton a deep sublime elegance, with piano minimalism and light glockenspiel touches added to some of their compositions. It is a sound that slowly draws the audience in, enveloping in a powerful atmospheric otherworldliness. Obvious comparisons can be drawn to Mogwai and Explosions In The Sky, but in many ways Mono have a more focussed restraint than these bands. They forge a narrative that is brutal, cinematic and bigger, yet it is also full of intricate subtleties.

Mono are a band at the top of their game; staggeringly hypnotic and as a live act, potent beyond belief.
Posted by Breaking More Waves Blog at 00:01

Email ThisBlogThis!Share to TwitterShare to FacebookShare to Pinterest
Labels: Mono