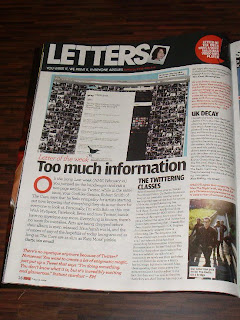 The opening line of this blog was due to say something along the lines of “So, we failed again.” Except we didn’t.

After just 3 emails, we’re proud, but also a little gutted to announce that already the first part of our challenge is over. Before we had even got going with some of the comedy letters we had planned, the bloody NME have only gone and printed our email about bands being over exposed and not being allowed to make mistakes from two weeks ago as their Letter of the Week. They’ve edited it slightly for grammar (never the strong point here) and to reduce the word count slightly which we feel is acceptable. But what rankles is that they only went and got our name wrong. Who the hell is 'Gary' ? Idiots. And then they had the cheek to adjust our description of Robert Smith of The Cure as Fat Bob, to just Bob. We think they got scared that uncle Bob might send his goth lawyers round to burn down NME towers if they insulted his ‘Godlike Genius.’

We quite liked the response of Emily Mackay, this weeks letters editor to our little rant. It almost made us laugh. This is what she wrote.

“There’s no mystique anymore because of Twitter? Nonsense! You want to create a bit of enigmatic magic, just put up a Tweet that says “I’m doing something. You don’t know what it is, but it’s incredibly exciting and glamorous.” Instant stardust - EM. Just a shame you can't get my name right Emma, sorry Emily.

So before Breaking More Waves moves on to Part 2 of our email challenge, which will be revealed in a couple of weeks time, here is our final E Mail to the NME.

Thank you for publishing my email last week as ‘Letter of the week.’ What I don’t understand is how you can call yourselves journalists and then get basic facts wrong. You printed my name as Gary. Who the hell is that ? Idiots! I demand a full page apology and your weeks wages paid to a charity of my choice. Otherwise those pictures of you naked, laying in a pool of vomit after the NME Awards will be on their way to the internet.

What disappoints us most about the end of this challenge is that we managed to get ‘Letter of the Week’ without even trying that hard. As we said a few weeks ago in our opening piece on this challenge, times have changed and the NME has undoubtedly dumbed down. This was just too easy. Our next challenge may be a little harder......
Posted by Breaking More Waves Blog at 00:01

Maybe you should try fixing the world economy next...

If I could do it by email and it involved music then I would. Instead I have a far more interesting challenge coming up...

Haha. I love that they corrected your grammar but then got your name wrong. Brilliant.

Yes, back to school for the NME I think.

Unless of course someone called Gary copied your letter from the blog and also sent it to nme - and they printed that one...