The Prodigy - Invaders Must Die 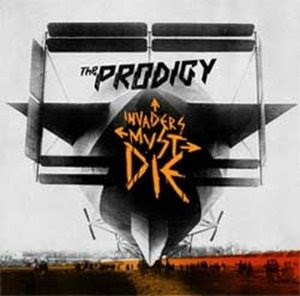 New folk, new rave, new gazing, new wave of new wave. It seems like every single genre has a ‘new’ element to it. With Invaders Must Die, The Prodigy take no notice of the new, and keep it very old school.

Invaders Must Die harks back to the days before Liam Howlett, Keith Flint, and Maxim Reality dropped a stinker with Always Outnumbered, Never Outgunned. This is an album full of adrenalin heavy beats, pummelling bass sounds and dirty electronics. It piles on layer upon layer of aggression, samples and vocal hooks that at their best match up to some of their very best work, even if it shows virtually no progression from their early nineties anthems. Take the turbo sound system of Warrior's Dance for example, which features sped-up Barbie on acid female vocals and stomach churning bass rave sounds last heard somewhere in a field in Hampshire about 1992.

This album is stupid, break beat, hyperactive and absurdly fun. The Omen is a deliriously mindless chart fighting single with its sloganeering shouted sample of “Now the writings on the wall, it won’t go away.” It just screams for a bit of thrash dancing amongst strobe lights and dry ice. Run With The Wolves is the most outwardly rock number on the album, bringing in Dave Grohl of Foo Fighters and a sample from So Refined by Senser, but for the most part Invaders Must Die is all about a tried and tested sound of crazy dance till you explode stadium rave. This is an album that says its ok to get out those glow sticks and bandanas again. It may be formulaic, but it still rocks.

Email ThisBlogThis!Share to TwitterShare to FacebookShare to Pinterest
Labels: The Prodigy

I seem to remember that Keith Flint (and maybe Maxim too) weren't even on AONU because Liam ditched the original version of the album after Baby's Got A Temper bombed and brought in Juliette Lewis etc for vocals instead. Actually I thought 'Girls' was good although a lot of the rest of the album was pretty mediocre.