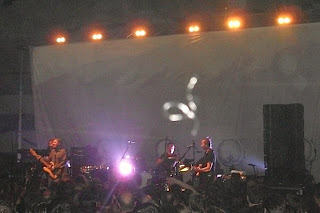 Doves occupy a similar ground to Elbow, in that they are both unaffected by fashion, hype or the whim of the music industry. Having first come to the public attention at the start of the decade, both bands have everyman lead singers who possess a dour but beautiful tone to their voice, and release consistent and constant bodies of work defined by quality. At their best each bands music is powerful, uplifting and life affirming.

Portsmouth Pyramids is sauna like in its heat and humidity for Doves return to a venue they last played in 2002, the mechanical services of the next door swimming pool clearly thinking the mainly male crowd here should be dressed in swimming trunks.

Backed by five large white circular lights and a series of sometimes rather obvious projections (Sea Song for example shows the sea) Doves are here to show that after four years of domestic upheavals and loss they are back, doing what they do best; making music together. Showcasing a variety of new songs the band are, except for one false start, musically tight and competent without ever being revelatory.

The new songs the band play consolidate much of the sound that they have become known for on their previous three albums; big, epic soaring guitar anthems. There is no huge change in direction, just a hint of an ambient electronic spark here and a pinch of rhythmic experimentation there, but otherwise it is business as usual. This familiarity of style fails to ignite or deliver the excitement of the discovery of the new, but it is comfortable and presumably satisfies the bands fan base. New single Kingdom Of Rust is a perfect example of this, a road trip into the past lyrically with a sound that could only be this band.

It’s not all about new material though. There’s the superlative Here It Comes where lead vocalist Jimi takes a backseat on drums rather than standing stage front with a guitar, and Pounding also sounds unsurpassable. Maybe it’s the environment of the Pyramids - the heat in the air and the carpet on the floor, but the audience fail to respond with the energy or euphoria one would expect from such an established band and sound. Even the carnival percussion on final song There Goes The Fear receives only a muted cheer rather than a deafening roar.

Doves continue to make widescreen sky reaching music. Tonight it just didn’t fly quite as high as it could. Bridesmaids rather than brides, for this evening at least.
Posted by Breaking More Waves Blog at 00:01

Email ThisBlogThis!Share to TwitterShare to FacebookShare to Pinterest
Labels: Doves