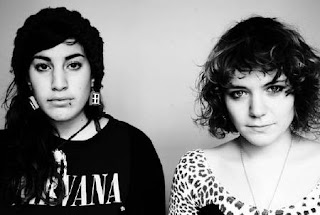 Peggy Sue, from Brighton, used to be called Peggy Sue and the Pirates. They consist of Rosa “Rex” Slade and Katy Beth "Klaw" Young, now recently joined by a drummer called Olly. Their sound is stripped down, raw and minimal with just a guitar and drums with guest appearances from other instruments such as the melodica and tambourine. Their music is heavily based on strong soulful vocals and quirky harmonies combined with an odd mix of rockabilly and punkish folk. They have played numerous gigs including some high profile supports with Kate Nash. The group have released several EP’s and singles as well as a monthly demo CD for a period of a year. Let’s meet them.

This article is called ‘Welcome To The Beautiful South’. You guys are from Brighton. What are the good and bad things about being a musician in Brighton ?

We’re actually Londoners but the band was born in Brighton and I think it wouldn’t be the band it is if it hadn’t been. Good things are that the music scene is so diverse and not really cliquey at all and everyone is very supportive of each other. So we’ve played with bands like Blood Red Shoes and the Maccabees which musically doesn’t make perfect sense but shows the sense of community there is. The worst thing is that it can get a bit depressing if you start thinking about how many people and bands there are there and how unlikely it is that everyone will make a career in music.

What is your favourite place to play in Brighton ?

We played a show at the Duke of Yorks cinema that was amazing.

If Breaking More Waves was a tourist visiting Brighton what would you recommend we do for a weekend ?

Go to see a film at the Duke of Yorks it’s the best cinema and the popcorn is really cheap. Play the 2p machines on the pier and walk down the seafront past Hove to Moroco’s for an ice cream even if its cold. On Sunday have a Sunday lunch – Brighton is the best place for Sunday lunch. My favourites are The Constant Service or The Walmer. Go for a drink at the Hand in Hand but don’t take too many friends because it only fits about 20 people.

You used to be called Peggy Sue & The Pirates. Where have the pirates gone ?

We had musical differences.

Olly joined the band about 6 months ago. We’d wanted to get a drummer for ages but all the drummers we knew were already in bands. We bumped into Olly in Texas and said we were looking for a drummer. He’d come to watch us a few times back in England and his first reaction was ‘no, don’t get a drummer I like it how it is.’ But he called us when we were back home and said ‘if anyone’s going to be your drummer its going to be me.’ Its definitely changed the sound a lot but not in a bad way – he’s an incredibly creative drummer and also very fun. He’s a good addition for sure.

Your live sound has a raw edge to it that you have managed to keep in your recordings. Is that something that you plan to continue or are you going to ‘gloss up’?

I don’t think we will ever ‘gloss up’ partly because we are still not amazingly skilled musicians so part of the rawness comes from our abilities. Luckily all the music we love the most retains that rawness and we tend to be less interested in artists once it seems like they’ve perfected their art. Still, our song writing skills and our guitar playing abilities are improving all the time and we want to make music that we are proud of and that is long lasting but it would also be quite nice to make a living out of it. That spontaneity of anti-folk music and other music that isn’t overworked is really beautiful but at the time we’ve never been purely an anti-folk band our voices have a huge R’n’B and soul influence and that is music that is all about being perfect and impressive so hopefully we can find a middle ground.

We’ve seen you play a couple of surreal gigs. At Camp Bestival last year you were dressed as animals and the year before that you played in a Toy Museum at the Great Escape. Have you had any other surreal gig experiences ?

We played a show in Austin, Texas last year at a man named Hank Sinatra’s ranch. The stage was made out of old metal and there were hens and a huge bbq. All the English people were just following the shade around the garden in a little group because it was so hot. Then Two Gallants played later on and the drummer had to keep his kick drum in place with a big rock. It was basically the best day ever.

You’ve toured with Kate Nash and have just got back from dates with Mumford and Sons. What was it like ?

Both tours were amazing in different ways. The Kate Nash tour was the first tour we ever did and also the first tour she ever did so everyone was new to it and excited and it was really fun. Plus we got to play Shepherds Bush! The Mumford tour we just did was incredible though, it was much more humble but still the crowds were amazing and attentive and musically it made a lot of sense. We were all travelling in one van and sleeping on friends floors and it really makes you feel like you’ve gone somewhere – more so than when you stay in a travelodge every night that looks identical and stop in a service station that sells the exact same sandwiches. Although you do end up a bit smellier.

You also have something in common with Breaking More Waves...you played Bestival. We appeared there Djing in the Hidden Disco. Do you have plans for more festivals this summer, and if so any clues which ones ?

Yes lots. We want to play as many as possible. The only ones we have confirmed so far are Bestival and Green Man but we’ve got a long list of ones we want to play.

You’ve been putting out a CD a month to your fans. How challenging was that, and why did you do it?

It was challenging because we’re a big shambles and time management is not our strong suit. The actually making and posting of the cd's had a lot of stages and thus lots of moments where we just didn’t get things done it time. The CDs themselves were not a challenge to make - we put on a new song, an old song and a cover – and recorded them in friends bedrooms or on a dictaphone. We did it partly because we had no plans for official releases and we were getting restless and partly because we had a back log of old songs that we knew would never see the light of day. It was also a good way of forcing us to work on new material. It was a great thing to do and I’m really glad we did it and it’s pretty cool that all the months except the last two are already completely sold out.

Peggy Sue are playing various gigs and festivals this year. Catch them if you can. You can see a video of the girls dressed up at Camp Bestival, shot shakily by Breaking More Waves here.

Or here is a slightly less wobbly video !